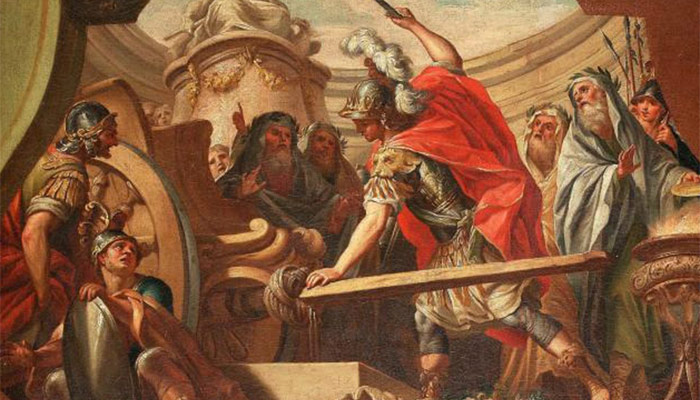 What is life? It is like asking what poetry is. We have innumerable answers. However varied may be your answers, you will all agree with the view that life is knotty, as we agree with the great Dr. Samuel Johnson who said of poetry thus: “If you ask me I don’t know. If you don’t ask me I know”. The affluent, the needy and the group that wanders between these two poles have one knot or another to untie in their everyday life. To some, the knot becomes easy to undo but to many it evolves itself into a Gordian knot, which needs the calibre of an Alexander the Great to cut. “Any intricate problem or task which is difficult or impossible to solve”, is known as the Gordian knot.

Gordian knot tells an interesting story connecting Gordius, a peasant and Emperor Alexander of Macedon. The King of Phrygia had died suddenly without any progeny to compensate his loss. The sad Phrygians were greatly disturbed. Chaos and confusion began to rule the kingdom. Gordius, a poor countryman, when busy tilling his small plot of land was surprised one day to see a royal eagle perch on the pole of his ox-cart. At first, he ignored its presence and continued with his work. But when the royal eagle stayed there the whole day, he was troubled. Without a moment’s hesitation, Gordius drove his cart towards the Phrygian Telmissus to consult the oracle as to what this sign from heaven might mean.

At the gate of the city, a young prophetess who saw the royal eagle still perched on the pole stopped Gordius and said: “The bird brings you luck. You are a very fortunate guy. Offer immediately proper sacrifices to Zeus, Father of Gods and men. And let me accompany you to make sure that you choose the correct sacrificial altar”. Overjoyed, Gordius replied: “Certainly yes, if you are prepared to marry me”. Both were on their way to Telmissus.

Meanwhile, the oracle at the public square of Telmissus announced: “Phrygians! Your troubles would be solved if you make king the first man approaching the temple of Zeus seated in an ox-cart”.

When Gordius entered the public square of Telmissus with his newly wedded wife in the ox-cart, the Phrygians in obedience to the command of the oracle unanimously acclaimed him king. This king and queen later became parents of the famous Midas of golden touch.

Gordius, in gratitude, dedicated his ox-cart to Zeus, together with its yoke, which he had knotted the pole in a cunning manner, so that no one could see where it began or where it ended. No sooner had Gordius tied his peculiar knot, the Phrygians heard the oracle declare: “Whoever discovered how to untie the knot would become the Lord of all Asia”. This was the celebrated ‘Gordian Knot’. Many tried to untie it, but all failed. The priests of Zeus guarded it for centuries until Alexander the Great of Macedon (356-323 B.C.) “for whom the whole world was not sufficient”, in his conquests, came to Phrygia. He heard about the oracle and tried his skill. He was in no way greater than the others who tried it earlier. Growing impatient, he drew his mighty sword and cut the knot in twain and exclaimed, “I have undone it.”

Plutarch (c.A.D. 46-c.120), the famous Greek biographer famed for the Parallel Lives and Arrian (c.A.D.95-175), a Greek Officer in the Roman army, remembered for his Anabasis of Alexander the Great in seven books narrating his campaigns and Indica, descriptive of India and Indian customs tell that entire Asia was under the sway of Alexander, though his epitaph reads: “Here this tomb suffices the man for whom the whole world was not sufficient.” The petulant action of the Emperor gave rise to the idiom ‘Cut the Gordian Knot’ which means “solve a complicated difficulty by quick and drastic action.”

A work from home wife was greatly surprised to see her jobless hubby look damn tired when she gave him his morning bed coffee. “What happened darling? You look unusually tired today. You didn’t have a proper night’s sleep?” The hubby looked askance at her and in a fear filled voice replied: “Oh, dear! I just dreamed that I had a job.” Today the world is in need of bold-spirited leaders like Alexander the Great and not the ones like the hubby whose very thought of going to work made him tired. Plutarch had said: “To do an evil act is base. To do a good one without incurring danger is common enough. But it is the part of a good man to do great and noble deeds though he risks everything in doing them.”

Books have been an immense source of joy and comfort for a lot of us during this time and if this lockdown period has taught us anything, it’s about valuing our time and how we choose to spend it.