What will prick the bubble! 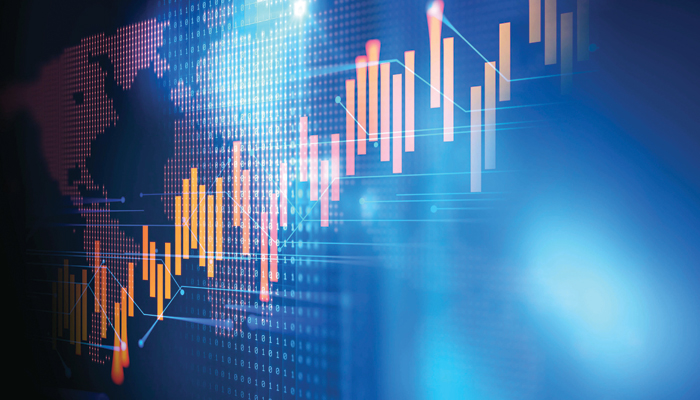 The current rally in the equity market has a clear and resounding message, ignore the economy and buy stocks. The sharp rise in the equity price has surpassed the expectation of even the most optimist investor.

The unprecedented rise in the equity market world over has stretched the valuation to an extreme level. Are we at bubble zone? If the answer is yes, then what will prick it and how you should position yourself?

The current rally in the equity market has a clear and resounding message, ignore the economy and buy stocks. The sharp rise in the equity price has surpassed the expectation of even the most optimist investor and best case scenario of most of the brokerage houses. Equity market represented by Nifty is up by more than 50 per cent from its recent lows it reached on March 23, making the June quarter as one of the best quarter in terms of equity returns in more than a decade.

If you go beyond the Nifty, the movement in share prices are crazier. Out of 2000 odd companies that were actively traded on BSE on July 24, 2020 and March 23, 2020, there are more than 300 companies that have doubled between these dates. And not all of these are penny stocks; the list also includes India’s large company by market cap, Reliance Industries whose market cap has more than doubled. Besides there are 57 companies whose price have increased by more than 200 per cent. Almost 1000 companies have gained more than 50 per cent in last four months

The above movement in the indices 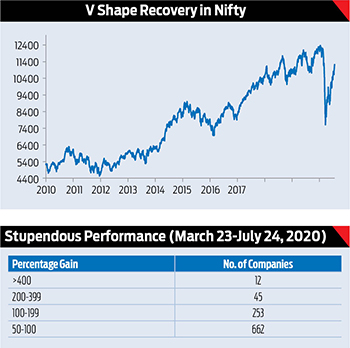 The above case of unexpected rise of the stock market ignoring the economy is not for India alone. Other countries are also witnessing a similar increase. For example stocks in Iran have rallied to record highs and the benchmark equity index has surged by more than double since the country’s first Covid-19 case was recorded on February 19, 2020.
Developed nation such as US is also not left behind. Tech-heavy NASDAQ has already crossed the pre-Covid level, while S&P 500 and DJIA are also at the sticking distance of pre-Covid level. This has made everything expensive. According to a report by Bank of America Corp, “Everything is expensive,” and 80 per cent of the markets that they track have a valuation in the upper quartile relative to the market’s history – the greatest percentage on record using data since the mid-1990s. Moreover, Bloomberg’s World Exchange Market Capitalization Index pegs global equity values at a record USD 76.3 trillion, a tally that tops the USD 75.3 trillion figure the International Monetary Fund uses to value the global economy. Both figures are record highs and suggest stock values outstrip the value of the economies in which they operate for the first time.
Given where things were just a few months ago it was inconceivable that we are now speaking of bubbles. Following rip-roaring performance of the equity market we are now in historic high valuation.

What will prick the bubble?

Going forward, any positive news on vaccine against coronavirus and the renewed signs of global growth could push equity market even higher, however, the elevated valuations will likely become a speed limit for returns again. This is the first time in last 21 years that Warren Buffett of Berkshire Hathaway’s has been criticized, for his recent underperformance. Warren Buffett has underperformed the markets badly over the last two years. Since the beginning of 2019, Berkshire Hathaway has underperformed the S&P 500 by over 40 per cent. There are many Robinhood investors who believe that they can easily beat Buffet and his style of investing does not work anymore. The last time Buffett received such criticism was when Berkshire Hathaway underperformed in 1999 amid the dot-com bubble. Everyone knows what happened after that. Berkshire Hathaway delivered a stellar double-digit outperformance over the next three years. Will the situation be similar this time around? The current situation could be similar considering Berkshire Hathaway’s massive cash pile.

Fundamentally there are two factors that drive the equity valuation. First is the cash generated by the companies and second the discount rate at which they are discounted to arrive at value of the firm. This discount rate very much depends upon the current interest rate in the economy. Right now due to ultra-accommodative approach adopted by central banks, interest rates are at multi-year low and hence part of the high equity valuation is justified. Nonetheless, the current valuation does not justify the low interest rate and the expected growth rate in cash flows.

The graph above clearly shows that 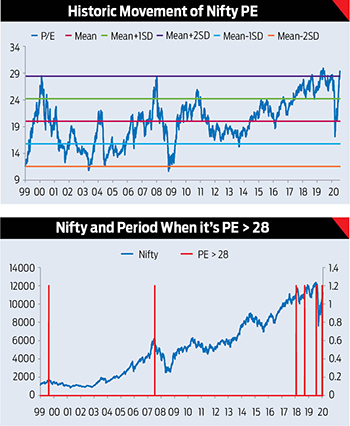 PE of Nifty is trading at two standard deviation above its last twenty year average. Historically, there are only couple of times when market has traded at such higher valuation. The important part of PE that is earnings has not even discounted the contraction in earnings that analysts are predicting for FY21. If we take that into account, the valuation will become even higher.

Analysis of Nifty of last twenty years shows that we have reached such higher valuation only few times. One thing that has remained common is that once the market has reached to this valuation, the next few years are not good from the return perspective. In the following graph we see that whenever, Nifty has traded at this level, it has seen sharp correction in the following few weeks.

Historical analysis of Nifty PE shows that whenever the Nifty has traded at this level, the next three year returns on an average are negative.

We believe that market is going to fall if not immediately, definitely in next few weeks. Never before, the Indian equity market has traded at such higher valuation with such grim outlook of the economy. Sadly, this bubble is going to burst into tears and despair.

What an Investor Should Do

For the reasons mentioned above the probability is also high that market is likely to remain range bound at best, however, the most probable scenario is: market is going to move downward. The rubber band effect has often used to describe moves in equity market, where prices stretched too far one way or other, they eventually snap back.
There are few things that an investor should keep in mind. One is: “Price is what you pay, value is what you get” and hence one should avoid quality at any price and growth at any price instead should follow growth at reasonable price. Taking an example from American market, in year 2000, Walmart was trading at 40x PE and market cap of USD 250 billion. Over the next decade company continued with its growth trajectory, earnings went up, dividend went up and everything went well for the company. But the stock did not pass its 2000 peak for next 13 years.

In order to get out of the crowd, an investor should have an independent mind. Instead of following what others are doing one needs to find niches that are likely to perform going ahead. Try to avoid what market thinks cannot lose. If you concentrate on your niches or themes, you are likely to do better and generate superior returns.

We, at IE&M Research, put all our effort to identify such sectors through our both the publications – Indian Economy & Market and Money Multiplier. We were the first to come out in the month of October 2019 about the ‘Gas Sector’ report, the ‘Pharma Sector’ in April 2020, ‘Agro-chemical sector’ in May 2020 and ‘Cement Sector’ in the June 2020 issue. All these sectors are in limelight now, however, we were early in identifying the trend and sharing it with our esteemed readers.

We are humble when we say that our recommendations are doing extremely well.
We believe that in the current scenario rural economy is likely to perform better than the urban market. This is likely to benefit stocks that derive maximum revenue from rural areas. What also supports this is management commentary from companies that draw major revenues from rural sector. According to them there is considerable surge in the demand from rural sector. This is also partially aided by expectations of a 4th consecutive year of good monsoons.

Although, FMCG companies are trading at higher valuations, once they get significantly corrected, investors can selectively invest in them. In addition to the above, sectors that are also likely to benefit from current economic environment are companies like IT and Pharma.

Latest quarterly results have also lived up to this expectation.
Our suggestion is not to rush to buy stocks that are on rage or are witnessing a vertical rise. On the contrary we suggest book profit now from all those stocks where you do not have much confidence and increase the cash level.

Our analysis shows that you will get many opportunities down the line to buy stocks and hence keep your war chest ready.