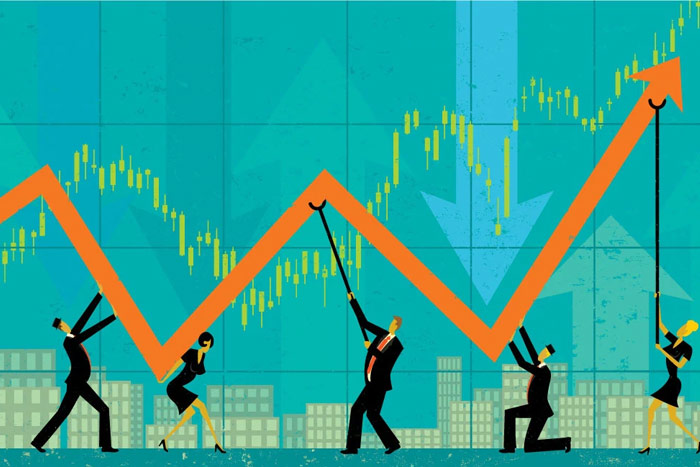 In spite of multiple challenges and warning signals emanating from the real economy, the capital market seems to be ignoring these warnings and continuing its upward trajectory.

Although COVID-2019 pandemic has turned our lives upside down, a careful analysis of the world, over the-last 100 years clearly shows significant turmoil leading to a massive economic damage at regular intervals up to late 1950s. The present generation hasn’t fortunately seen many of those changing turmoil. By and large last 60 years have been a period of unprecedented peace, harmony and economic development. In 1914, the First World War started and ended in 1918 with 22 million perishing. Spanish Flu epidemic started in 1918 and ended in 1920 which affected almost 50 million people. Great Depression started in 1929 and led to a 25% plus unemployment rate and a 27% drop in global GDP. This ended in 1933. World War II started in 1939 and ended in 1945 resulting in 75 million deaths. The Korean War and Vietnam War in 1950s led to around 10 million deaths. Now in 2020, thousands have died getting affected by COVID-2019 and we are in a state of panic. However, when you put things in perspective and look at the history of the World over the last 120 years, the scenario becomes quite enlightening. A storm is blowing over the world. We all are caught in it together.

Attempting to forecast the economic effect of the lockdown is absolutely impossible. Never before we have seen a man made recession of this scale nor have we seen policy responses of this magnitude to cushion the impact of the same on people’s livelihood. On the balance it is expected that still we are heading towards the biggest peace time recession in almost 100 years.

While debate around the effectiveness of the lock down to prevent spread of Covid 2019, will continue, for economies like India with sub optimal health infrastructure, the lockdown provided the authorities the much needed window to create and strengthen the existing health care infrastructure, which otherwise would have been overwhelmed if the virus had spread rapidly.

The collapse in economic activities appears to be coming to an end. The biggest risk is a flare up of new infections and further rounds of lock downs. Economic data is frightful now and growth engines are sputtering. Current prediction regarding domestic growth in India during the current fiscal is not at all encouraging, with the first two quarters being almost a wash out. Government sources predict around 6% GDP growth in the next fiscal. A lot will depend on timely and appropriate intervention by the Government to support the economy and of course no further escalation in the pandemic. The Government rightly has been focused on supporting the weaker sections of the society as well as removing bottlenecks in different sectors for increased economic activity in the post Covid days. Long awaited structural reforms, particularly in the area of agriculture and related infrastructure have been announced. Economists estimate that the supply side of the economy has been encouraged through these as well as other monetary measures announced by the RBI. However there will be a significant need to take measures for boosting demand and the same is still awaited. In the coming days this need for demand stimulation will become critical as India gets back to work. The fiscal constraints are well known but without adequate demand the supply side measures may fall flat.

While economy and the corporate performance continue to suffer significantly due to the dual impact of pandemic and lockdown, the capital market is on its upward journey without any pause or doubt. These disconnect between real economy and the capital market is getting accentuated all over the world. Primarily abundance of liquidity and consequent ‘risk on’ mood of the global investors has fuelled this rally in stocks.  Thus, in spite of multiple challenges and warning signals emanating from the real economy, the capital market seems to be ignoring these warnings and continuing its upward trajectory.

In Greek mythology, one comes across a bandit character named Procrustes who lived on The Sacred Way between Athens and Eleusis. Procrustes used to invite tired travelers to his home, give them food and offer them his bed to rest. However, if the travelers were short and did not fit the bed completely, he would hammer and stretch them. If the travelers were tall, Procrustes would amputate the excess length. In either case, the travelers died. This story of the Procrustean Bed is used to describe how people try to fit facts into a preconceived theory. Researchers have shown that we actively seek out only the information that supports our beliefs or actions and ignore or undermine the information that is contradictory. This tendency affects investment decisions too. It comes in the form of two characteristics of our behavior – Confirmation Bias and Cognitive Dissonance.

Markets may be similarly building a utopian boom scenario lead by pent-up consumption demand and fueled by abundant liquidity. Investors are actively searching for reassurance and confirmation to their theory of continuously upward moving markets. Markets are noticing every small positive development and all new developments are being viewed under the lens of existing conviction. This confirmation bias may lead to overconfidence and lead to vulnerability due to high portfolio concentration and leverage. It is advisable for the investors to be extremely careful in the market and only buy good quality stocks for long term hold, at current levels. There may still be opportunities for picking up good quality stocks for long term hold, in sectors of the economy which are related to rural and agricultural areas. But extreme caution should be exercised before entering or making fresh investments in capital markets at this stage.