India’s famous Member of Parliament and strong votary of accountability in public life, Dr Subramanian Swamy has written the foreword to Palak Shah’s first book The Market Mafia and titled it “an exposé of the inner rot in India’s stock exchange ecosystem.” 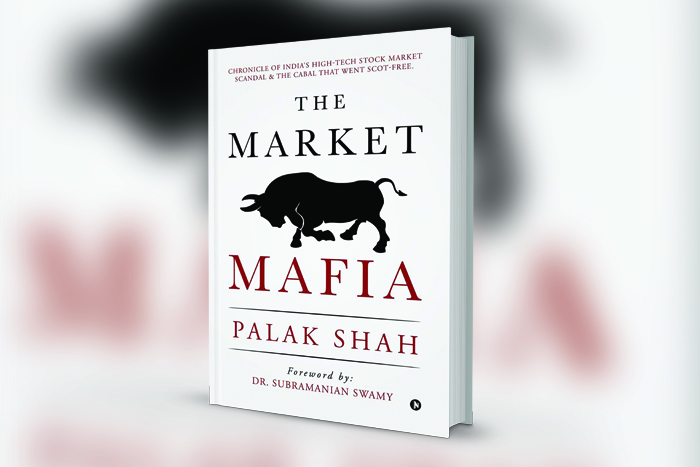 India’s famous Member of Parliament and strong votary of accountability in public life, Dr Subramanian Swamy has written a foreword to Palak Shah’s first book The Market Mafia and titled it “an exposé of the inner rot in India’s stock exchange ecosystem.” Dr Swamy makes no mincing of words in naming P. Chidambaram, Sonia Gandhi. “Stock markets had become their ‘cash cow’ and the book aptly reveals the plot without beating around the bush.” Also exposes bogus PhD scholars that infiltrate the country’s policy think tank.

Palak Shah, the author and himself a journalist believes “for a journalist, to publish and be damned and publish again is routine.” “The book is a work of non-fiction. No names were changed, no characters were invented or events fabricated here.” The author meticulously narrates a scandal of much larger magnitude involving data theft at NSE and the organised white-collar crime involving named and famed individuals anointed at high institutional positions that have largely remained a mystery. It’s a true account of all hand-in-glove and the market watchdog Securities & Exchange Board of India that casually barks at the minnows but never bites the big sharks that hold positions of influence including anointment of SEBI chief.

In democratic and free markets, as a sacred rule, no trader can have preferential access to a stock exchange platform. The ethics demand that no tool, order type or service can be obtained exclusively by a few from the exchange by whatever means, even as the rest remain forbidden from it. But few – the market mafia – connived to turn the stock markets into an ‘Animal Farm’. Those few with their tech tools became ‘more equal’ than the rest.

Ably edited by Rommel Rodrigues, the book brings out certain bitter truth in a satire: “Nalini was, of course, one, but controversy seemed Chidambaram’s another wife.”

“With the facade of CMIE, IGIDR and the backing of Dave, Lakdawala gave Ajay and Susan an advantage to mask the fact that Susan, who has also been a guide to a SEBI official in doctorate studies, did not herself hold a PhD degree.”

“Those handful people, occupying the upper echelons of NSE, were letting down the very institution where they were employed for a long time. This cabal with no regard for rules or fear of law were embodied in abuse of power with impunity.”

“There has been a massive under-reporting by SEBI of the illegitimate gains made by OPG Securities. OPG churned ‘prop trade’ volumes worth a whopping `26.64 lakh crore (approximately USD 484 billion).”

“If Susan (wife of Ajay Shah) is a designated partner and key managerial person in a company since 2010, which later contributed `200 crore to a PE fund, does the regulator not need to know who actually this money belonged to?”

“His (Dr Mohan Gopal, head, National Judicial Academy) letter told a tale of raw abuse of power by the ‘bureaucratic brotherhood’ that ran deep in the vein of India’s administrative system.”

“Like the millions at the Happy Valley Racecourse, all stock market traders would like to think that they could win, not knowing their wager is against Algos similar to Benter and Coladonato, which wouldn’t lose.”

It is here (RAND Corporation) that both Ajay and Susan cut their teeth into ways of influencing public policy and thinking, which would go a long way in devising strategies to seep into India’s policymaking Juggernaut.

“Rich proprietary brokers, who trade not for clients but for themselves and few FIIs first filled up all the COLO server space at NSE. ‘Fair market access’ was now just a cliché.”