Laws are formed, shaped, and passed in Parliament for the whole nation. A bunch of rowdies from a certain part should not be allowed to derail the process. The farm bill has absolutely no flaw. 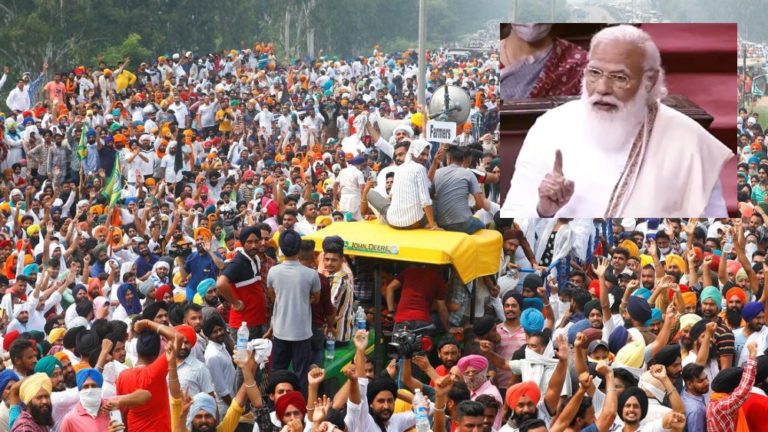 First thing first, please remember the ongoing ‘so-called farmer’s agitation’ at the Delhi border gives the message very loud and clear: How difficult it is to bring about changes in India. And it must have been the reason other political parties when in power, could not muster the courage to act upon the promises given by them in bold letters in their election manifestos. They just announced but didn’t act on them. And now when the present government has brought in their ‘much-desired reforms’ the same parties and leaders are cursing the government and calling it ‘black’ laws. It’s another matter that neither any political leader nor the ‘so-called farmers’ yet have been able to point out the ‘black’ in the bill.

The opposition MPs don’t want democratic debate; they only want chaos on the streets. To confirm just have a look at the video on the Rajya Sabha channel. The empty seats indicate not even 20 MPs were present when discussion on Farm Reforms was happening. With my journalistic experience, I can vouch that not more than 10 percent of the MPs have actually read the Farm Bill. What makes me really sad is that the hatred against Narendra Modi has shifted towards hate against India, against India’s sanity.

A Minister from Punjab who was very much a part of the cabinet meeting when laws were cleared by the cabinet, resigned. The party in power in Delhi, which boasts of being the only party having ‘educated people,’ notified one of the three farm laws immediately after these were passed in Parliament. When Punjab farmers threatened to hold the national capital hostage with their protests, within two weeks ‘the party of highly educated people’ took a U-turn and came out in support of the agitating farmers. It is now demanding to scrap the laws. The leader of the educated party even tore up copies of the farm bills, and alleged, “These farm laws have been brought to ensure political funding for BJP.” It was no secret how the party had been romanticising Khalistanis for long. Now one of its own, actor and one-time its Party candidate Gul Panag in a tweet has confirmed that she had warned the party against associating with Khalistan separatists during the Punjab Assembly elections in 2017. A former Agriculture Minister who wrote several letters to CMs advocating the same laws took a U-turn without blinking an eye. The oldest political party had these in its 2019 Election Manifesto under a bold headline. Now the same party strategists are demanding PM’s head.

All these developments only thunder that the agitation and the support to it have got nothing to do with the laws, in fact. Something else is brewing somewhere and these people are just pawns, who have sold their conscience in order to oppose the Prime Minister personally and politically. How fast they change their opinion! Those who were condemning the miscreants of 26th January are now providing legal aids to them.

It is good that after 70 days of the well-calculated and well-managed protest (which beyond any doubt is foreign-funded) the faces of the people behind this are slowly coming out in the light. Having been shrouded for so long and acting behind the wall, it seems they too got bored and wanted the limelight.

First, a ‘paid’ tweet (yes, such individuals charge high amount to tweet) came from Rihanna, the fourth most followed celebrity on Twitter with over 100 million followers (and ‘friend’ of an Indian origin Canadian MP who runs a campaign against India and provide funds to the Khalistanis): “Why aren’t we talking about this? #FarmersProtest.”

Immediately after that, the so-called teen climate campaigner Greta Thunberg’s tweet came with a “toolkit” guiding people on how to support the farmers’ protests. The toolkit exposes the conspiracy by an organized overseas network. In two parts the ‘toolkit’ gives instructions to the minutest detail and has all the strategies and directions to the people associated with the agitating group. However, the ‘teen’ soon realized her mistake and deleted the attachment which was probably for internal circulation. By the time media was discussing its content.

A section of the world leaders had already been saying that a group has put forward this girl in the name of environment protection with some ulterior motives. Now their apprehension is found to be right. But the traitors were successful as the protest received international attention. A case has been filed by the Delhi Police that includes charges of sedition, and overseas “conspiracy”, however, no names are given. The Delhi Police said the ‘toolkit’ was authored by a group called the “Poetic Justice Foundation” which is a “Khalistani organisation”.

At present thousands of farmers from Punjab, 5 districts of Haryana, and 3 districts of UP, have been protesting and demanding rollback of the Farmers Produce Trade and Commerce (Promotion and Facilitation) Act, 2020, the Farmers (Empowerment and Protection) Agreement on Price Assurance and Farm Services Act, 2020 and the Essential Commodities (Amendment) Act, 2020. Amongst many path-breaking provisions and reforms the laws give farmers alternatives to sell their produce outside ‘mandis’, and unlike the state government notified market places, such sale would not attract any tax. Secondly, it has very strict legal safeguards to protect farmers’ interests.

Supreme Court’s order putting on hold the farm bills was terrible constitutional precedent, bereft of judgment. Indian judiciary is not doing what it should have been doing as the pending cases reflect rather it is jumping where it has no legal jurisdiction. Its decision gave enough ‘moral fuel’ to the lobby acting to derail the reform process in the country. Even former RBI governor Raghuram Rajan with his penchant of sticking his nose in everything Indian started criticizing the government whereas Rajan had advocated the same farm laws earlier. Rihanna has her own following in India too. A lesser-known actor Diljit Dosanjh created a song in her honour in less than 24 hours after she lent her support to the protest.

A respected media house Guardian reported that “nine Indian journalists are facing criminal charges for reporting allegations that Delhi police fatally shot a farmer in the head during protests on 26 January, despite the authorities claiming no shots were fired. However, photographic and video footage of Singh’s body, as well as the postmortem report, indicate he suffered an injury, according to doctors who reviewed the evidence.” Surprisingly, all the journalists named are the usual suspects, who are continuously running a campaign against Narendra Modi. These journalists had gleefully tweeted that day at the peak hours about police firing and the alleged death of the farmer. Even the lifestyle magazine Vogue has entered in the fray publishing in its last issue huge photograph showing women from Punjab sitting with a placard in their hands.

Suddenly according to the Economist Intelligence Unit (EIU), India slipped two places in the Democracy Index’s global ranking. India slipped to the 53rd position due to ‘democratic backsliding’ by authorities and ‘crackdowns’ on civil liberties. India has been classified as a ‘flawed democracy’. “With mounting pressure on India’s democratic norms, India’s score fell as a result of democratic backsliding under the current regime,” The Economist Intelligence Unit said.

And the list is long. There is certainly a full-blown conspiracy.

The leader of the agitating farmers Mr. Rakesh Tikait, is basically a politician who has lost two elections – the Assembly election in 2007 and General election in 2014, times he could not save even his deposit. He was a sub-inspector in Delhi Police in 1985, left his job in 1993, only to join Bhartiya Kisan Union, of which he was a natural successor. After the death of his father Mahendra Singh Tikait, his elder brother Naresh was given the responsibility of Baliyan Khap and BKU and Rakesh as a speaker. On January 26, when he smelled that the government is planning to crush the protest with force and his ‘manufactured protest’ may crumble he went emotional on camera and cried.

Watching this scene on TV I remembered when Mahendra Singh Tikait was arrested after he made some casteist remarks against UP CM Mayawati. Police and his supporters clashed for three days when the administration tried to arrest him. When he realized Mayawati is not going to spare him he meekly announced “that remark was a mistake and Mayawati is like my daughter.” Unfortunately, this government could not seize the moment. Mahendra Singh Tikait had the credit of being a Chaudhary of Baliyan Khap, at the age of eight after his father’s death. That makes Mr. Tikait the third generation ‘leader’ of farmers.

So like in politics, accept the fact that he was ‘born leader’ of Indian farmers. But I’ve no doubt this man is only preparing for UP’s 2022 elections.

Let us understand – no real Indian farmer is a farmer by choice. Also, a real farmer is one who has to support all his needs right from his child’s education to his daughter’s marriage from his farming income. A real farmer is on his farm and not at the Delhi border. The protesting farmers are businessmen in the garb of annadata. We must get rid of such stupid words. Like any other sector, agriculture needs reform and that’s what the government is doing.

Laws are formed, shaped, and passed in Parliament for the whole nation. A bunch of rowdies from a certain part should not be allowed to derail the process. The farm bill has absolutely no flaw. The so-called 40 farmer union leaders have no substantial followings. The opposition’s claim that farmers across the country are agitated over the laws is again rubbish. It is limited to one state and some adjoining districts. Either farmer living in these areas have no common sense or they have been misinformed and instigated.

Now as the conspiracy is busted the government must send a stern warning and first put these ‘leaders’ in jail for their acts on 26 January. Remember, this bunch is just wannabe or failed politicians. The government should not again call them for discussion and go ahead with the reforms. Just a few paid (either in kind or in cash) farmers should not be allowed to take the country to ransom.