Risk is not a one-dimensional problem cured by a single dose of diversification. 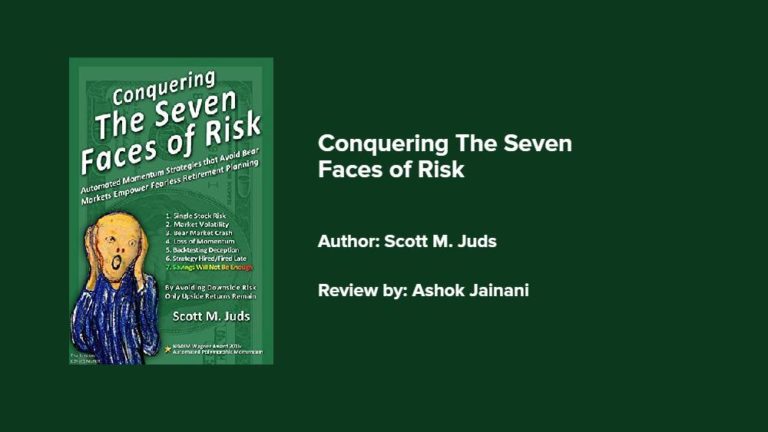 Momentum at varying times is treacherously monstrous. Decades-old simplistic models, developed on small faulty data samples, fail to assess and determine risk because the risk is not a one-dimensional problem that can be cured by a single dose of diversification. It’s a multidimensional problem, and passive risk reduction through diversification isn’t the panacea. Generally, and mathematically, risk has been measured as the standard deviation from an average return or described in terms of volatility. However, Behavioral Economics (and even the dictionary) say the risk is really about the loss of value, which is quite different from volatility.

The author, “as a frustrated investor” knew there must be something better than “diversify and rebalance” and discovered important investment principles. Risk has at least seven unique faces, including (1) Single-Stock Risk, (2) Market Volatility, (3) Bear Market Crash, (4) Momentum Loss, (5) Backtesting Deception, (6) Strategy Hired/Fired Late, and (7) Retirement Savings Will Not Be Enough. The elephant in the room for the majority of people facing retirement is a serious retirement savings shortfall – which is their most serious risk about earning sufficient returns.

Sports teams, gamblers, and many others commonly use past performance as an indicator of the future. “Rules, beliefs, and respected traditions can all create performance correlations.” However, new ideas can, and will always, take root and the world keeps changing forever – for good or for worse. Suddenly, we are building billions of cell phones and yesterday’s public phone booths are nowhere. Depending on a formula to provide a portfolio design today that could be meaningful tomorrow is fraught with hazards. People with different backgrounds and in different life situations treat and react to the same risk differently.

“Victorious warriors win first and then go to war, while defeated warriors go to war first and then seek to win.” Sun Tzu is telling us that we must study and know our enemy before engaging him in battle. In the real world, the enemy is rarely singular in being or character – and defeating investment risk is no exception.”

“While the trigger for the next market crash (and the one after that) could again come from things we don’t know that we don’t know, we do know about one particular time bomb staring us in the face – the demographic time bomb.”

“While news, weather, political events are notoriously unpredictable, humans trading on these events behave in a manner that injects momentum into the market.”

“A random world offers no evolutionary advantage for remembering anything. Tomorrow is always different.”

“Using the current optimum route to estimate travel time is still problematic because new problems can emerge en-route… Backtesting with hindsight may well tell you the best path you could have traveled, but without the benefit of hindsight, it may not be able to find that optimum path walking forward in time”

“How can I most effectively extract the momentum signal from noisy market data in a manner that helps improve returns and reduce risk?”

“Market bubbles are driven by momentum feeding on itself. On the way up, a self-fulfilling prophecy supports ever-higher prices until the optimists run out of fuel and are overwhelmed by the pessimists. Momentum reverses to the downside and feeds on itself again, continuing lower until there’s nobody left willing to sell.”