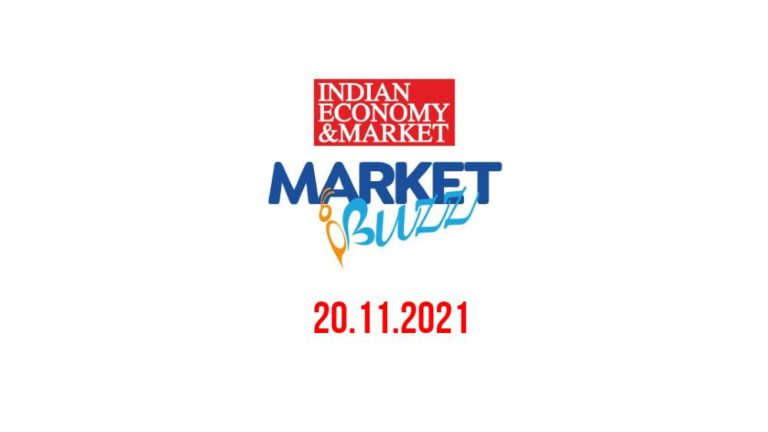 In the previous IEM Market Buzz, released on 14th November, we shared news about ESCORTS LTD. Our sources proved correct and the stock has rallied over 230 points since then. It only proves our unbiased approach. Transparency & Reliability makes Market Buzz unique.

Tata Power has shown fabulous upward movement. YTD the stock is up by 213 per cent, in the last 3 months up by 82 per cent, and in one year up by 291 per cent. But in Q2 its operating profit came down from Rs 1967 crore to Rs 1329 crore and operating profit margin is 14 per cent from 24 per cent. TTM basis it’s trading at 52PE with an EPS of 4.55. In the short, to medium term, the stock price is certainly not sustainable and profit booking is suggested. Re-enter at 10-15 per cent below price as the long-term story is intact.

Indian Energy Exchange has moved up very fast – YTD 245 per cent, YTD 277 per cent and in 3 months a whopping 94.5 per cent. At 8.68 EPS on TTM basis the stock is trading at 90 PE. Although a steady growth of 20-25 per cent will continue as Q2 numbers reflect, yet at 90 PE it certainly is a very high valuation. Last many months it was the trader’s favorite stock and many investors must have entered at a high price. 15-20 per cent correction is overdue. Be careful.

Precision Camshaft, a leading auto ancillary company, has launched India’s first Passenger E-Bus and with this entered aggressively in the EV segment. Q2 numbers too were good as sales, operating profit and net profit were up by 17, 56 and a whopping 335 per cent respectively. The stock in 2016 made an all-time high of Rs 185, now trading at Rs 115. Keep in Watch List and enter when it falls further as with EV alpha it has all the ingredients to give a huge return.

Shipping Corporation of India board has approved the Scheme of Arrangement for Demerger of ‘Non-Core Assets’ between SCI (Demerged Company) and SCI Land and Assets (Resulting Company). This move will also pave the path of its privatization.  Keep an eye for the medium term.

Tata Motors has been continuously recording double-digit growth month on month, taking over 3rd position in passenger vehicle segment and ready to surpass Hyundai, the second slot owner. It has a large product range and as the semiconductor issue is resolved the company has entered into 4-5 years growth era. Buy at every correction. A must stock in a portfolio from large-cap can easily double in 2-3 years.

Granules India, like other API producers, gave multiple times return during the Covid period. Facing an uncertain future, companies on a global level stored API in huge quantities to last for at least 3-4 quarters. Thus demand was affected. Secondly, rising container rates also dampened the spirit. Now after Q2 during Concall almost all the promoters said that from Q4 demand will come back. After making a high of Rs 438, it is trading around Rs 300. With the limited downside, 30-40 per cent return in a year is not ruled out.

ITC is the safest bet in this market. The strong buzz on Dalal Path is its InfoTech business with a valuation of around Rs 25000 crore could be separately listed. Other divisions FMCG, cigarette, and the food business also can follow suit. Huge potential as far as valuation is concerned, it will be the biggest value-unlocking ever seen. Value-wise it is definitely the cheapest FMCG stock with steady growth.

TV Today is again in the news since Abacus acquired 8 lakh shares at Rs 345 recently. Q2 numbers were good as sales, operating profit and net profit were up by 28, 45 and 69 per cent respectively. This debt-free company, available at the right valuation is slowly moving towards Rs 500 range.

Palred Technologies provides solutions that cater to the database management of a company. Its other two subsidiaries are Palred Electronics which it’s brand PTron offers mobile accessories products like Bluetooth headsets, chargers, smartwatches, and networking products whereas Palred Retail owns the e-commerce site LatestOne.com. It will soon be expanding its footprint into the offline world, through brick and mortar stores. The stock is on its way to double century and buzz is ‘Something Big Will Happen Soon’ at this Counter. Compared to other new-age companies it’s still available at a cheaper valuation.

Morepen Lab is into four major verticals namely API, Medical Device, Formulations, and OTC and these recorded in Q2 respectively a growth of 9, 36, 28, and 22 per cent. Overall in Q2 sales, operating profit and net profit were up by 17.5, 32 and 37.5 per cent respectively. In July the stock was trading at Rs 75. Now down by 37 per cent from that level, it has entered into an accumulation zone. A perfect candidate for long-term investment.

IRB Infra has attracted two suitors – Cintra Global, a subsidiary of the world’s leading infra company Ferrovial, will invest Rs 3180 crore and GIC will invest Rs 2167 crore, making a total of Rs 5347 crore infusion in the company. Both will be allotted preferential shares at a price of Rs 211.79. During this announcement, the stock went up to Rs 346 but soon corrected to Rs 221. If these two big brothers are finding the counter attractive at this price then certainly it provides a risk-free investment opportunity.

Mahindra & Mahindra, the undisputed leader in the SUV segment, is glowing in the reflected glory of Escorts. Readers will recollect that last week we wrote, “Escorts Ltd. may see a huge rally as Kubota Corp is raising its stake.” Within four days the stock was up by 15.5 per cent. M&M will also claim the same valuation and the stock will get re-rated as its Tractor sales are showing good up move. On the other front, bookings for XUV 700 have crossed 75,000 vehicles, and next year it will launch the next-gen model of Scorpio. It is the best large-cap catch. But enter at a correction of Rs 100-150 to get a double return in 2 years.

Finolex Cables, last week even in bad market sentiment, has shown a big up move with impressive volumes. Q2 numbers were good as sales, operating profit, and net profit were up by 46, 31, and 41 per cent respectively. The financial performance and stock price action clearly show the counter will once again touch its 2018 high of Rs 741.

Kabra Extrusion Technik, a 5-decade old company with 2 plants in Daman, supplies a wide model range of extrusion lines for uPVC, cPVC, HDPE, PPR pipes, and a preferred choice of processors in many countries. Now it has entered into Lithium-ion Battery pack manufacturing using the next-gen technology for EVs after establishing a plant in Pune. With Q2 sales, operating profit, and net profit up by 20, 23, and 11 per cent respectively, the counter will get an upper valuation due to the battery segment.

IND-SWIFT LABORATORIES, which is, after its failed attempt with PI Industries, is rumoured to be engaged now with PE firms CX Partners, Advent International, and Carlyle Group to sell a large minority stake. A global manufacturer of 30 APIs, intermediates, and formulations it has 6 manufacturing sites with a presence in 70 countries and 280 domestic clients. It has given the best Q2 performance after many years with the operating profit margin going up by 24 per cent. The counter is ready to move again in three digits.