The story of Kannaki is a real-life drama that starts with a romantic note and ends with a message. The heroine of the first epic poem in the Tamil language Sila-pathi-karam 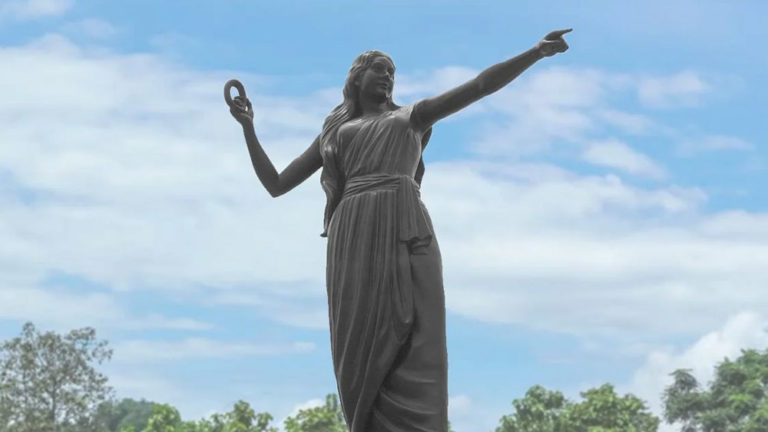 The story of Kannaki is a real-life drama that starts with a romantic note and ends with a message. The heroine of the first epic poem in the Tamil language Sila-pathi-karam (anklet story), Kannaki was the wife of Kovalan, a very wealthy merchant. This wealth made him discard Kannaki and live with a danseuse Madhavi. They were so attached to each other that they soon became parents to a girl, named Manimegalai, the heroine of the second epic in the Tamil language, named after her. A slight misunderstanding drove a wedge in their love that led to their separation.

Having spent all his wealth on the enchanting danseuse, poor Kovalan was back to his broadminded wife, Kannaki, who forgave him for his intrepidity. Kovalan was eager to get back all that he had lost by engaging in business. The couple left their place of stay, Puhar, for Madurai. Once in Madurai, Fate (shall we call it the will of God?!) took him to a wily goldsmith, in the city market. Kovalan’s intention was to sell the single anklet that his wife was gracious enough to part with and collect the money it could bring. But the goldsmith who had stolen the queen’s anklet found an opportunity to foist his theft on innocent Kovalan. Hence he sought the king’s presence, without knowing that the king had a tiff with his wife. So in a very bad mood and without any inquiry, the king said, “Kill him and bring the anklet”.

Since beheading was the only punishment for stealing in those days, Kovalan was beheaded and his anklet was sent to the king. When news of Kovalan’s death reached Kannaki, she in a fit of fury rushed to the court and accused the king of his unjust justice. She showed him her other anklet and wanted to know what gem his stolen anklet encased. ‘Pearl” he said. Kannaki dashed her anklet against the floor and out flew an encased ruby only to give him a hit on his nose.

The king realized that he was at fault and not Kovalan. Never before, he had given such an unfair judgment. The next moment he died of a broken heart. His queen, a one-man woman, followed suit. Not yet appeased, Kannaki tore her left breast and threw it at the city of Madurai. Like a bombshell, it worked and Madurai was burnt to ashes. Kannaki then moved to Kongu country and climbed up the hill. A celestial vehicle, pushpaka vimanam, descended in which sat her dead husband. The vehicle picked her up and ascended to disappear into the sky.

The tribal people of the hill, who saw that miracle happen under their very eyes, narrated it to their king of Sera country, Seran Senguttuvan. He believed every word they said. Such was the faith the rulers of those days had with their subjects. His queen, who also heard the tribals speak, persuaded her husband to build a temple to honour that dauntless and valiant woman.

The decision once made, the king took out an expedition to Mt. Himalayas, to bring a huge stone for carving out an image of Kannaki for worship. Kanagan and Vijayan, the two princes in the North created a hurdle but the king put his foot down and brought the stone on the heads of the two vanquished princes. The consecration of the temple took place in about 120 A.D. History speaks in detail of the several royal families who honoured Kannaki’s temple by their presence, the foremost among them being Gajabahu of Ceylon. Kannaki, the deified woman, is worshipped even today as the goddess of dynamic chastity.

Ilango Adigal, the author of this epic Silapathikaram, was the younger brother of King Senguttuvan. He was also there when the tribals narrated what they had witnessed. At the close of his epic, Ilango Adigal delivers the message, through the mouth of Kannaki herself:

“Rise above pleasure and pain in accordance with the approved course of conduct. Know God, and serve those who have known Him. Fear speaking falsehood. Avoid tale-bearing. Refrain from meat-eating and abjure injury to any living being. Give gifts and perform the prescribed penances. Do not forget the good done to you. Despise bad friendship. Do not give false evidence, and never depart from words of truth. Do not fail to join assemblies of people learned in dharma. Strive ever to escape the meeting-places of the unrighteous. ‘Avoid other people’s wives and give succour to those who are dying. Protect the household virtues, but reject what is bad. Abstain immediately from drinking, theft, lust, falsehood, and useless company. Youth, wealth, and the body are impermanent. You cannot escape from the days allotted to you: nor can you avoid what will happen. So seek the best, before you land in Heaven. Do all this, O dwellers on this wide prosperous earth.”