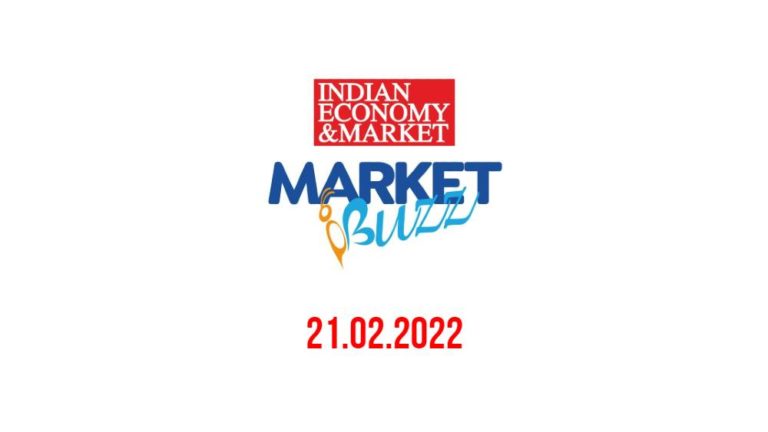 Taj GVK Hotels & Resorts was discussed here on January 17 & again on Feb 5, 2022. It has posted good numbers in Q3 wherein sales increased from Rs 36 crore to Rs 82 crore, operating profit from Rs 10 crore to Rs 29 crore and net profit from Rs one crore to Rs 12 crore. Next three quarters again with low base it is expected to declare good numbers. Now since the world is opening up and restrictions are being removed, the sector is sure to perform better. The macro scene and its good performance can lead to a re-rating. Not to forget its all-time high was Rs 342, now available at just Rs 133.

Larsen & Toubro which recently had made a high of Rs 2078 is at present down by Rs 200 and trading at Rs 1880. Active in happening sectors like infra, manufacturing, power, and defense the company will reap benefits from all including the big Rs 7.5 lakh crore spending announced in budget. Out of its total Rs 3.5 lakh crore order book Infra’s share is 73 per cent. Interestingly its market cap is Rs 2.65 lakh crore whereas if we calculate only all four subsidiaries market cap, it comes Rs 2.30 lakh crore. The kind of market situations we are in right now gives a very good chance to accumulate such quality large caps.

Adani Power gave the second best weekly closing last week after 12 years in a market when most midcaps and smallcaps were performing poorly. After a turnaround Q3 results it was naturally expected where against Rs 289 crore losses the company has posted a profit of Rs 218 crore. It seems the counter is ready to touch its high of Rs 167 very soon.

Lemon Tree like other hotel stocks was under pressure due to COVID. With 87 hotels in 54 cities and 8489 rooms Lemon Tree is the largest hotel chain in mid-price segment and third in overall space. The ongoing expansion will take these figures to 64 cities, 107 hotels and 10,500 rooms. Although Q3 numbers were not good its income and operating profit numbers were better first time after March 2020. With 22.81 per cent FIIs and 13.47 per cent DIIs stake the counter now is ready for a rerating since Covid is fast receding.

Jagran Prakashan, one of the biggest media groups active in 13 states, in 5 different languages and 39 Radio Stations, has posted good Q3 numbers clocking 29, 30 and 40 per cent increase in its sales, operating profit and net profit respectively. On 9 months basis its sales, operating profit and net profit were up by 35, 100 and 228 per cent respectively. Across the media sector the advertisement revenue has substantially increased in last 6 months. With an all-time high of Rs 213 and now trading at Rs 77 the counter may move into triple digits.

Coal India, the largest IPO till 2010 when it made high of Rs 350 giving big listing gain to investors (issue price was Rs 245), has always remained a mystery stock. After that there has been no price movement to talk about. For first 7 years it was trading between Rs 235-400 and next 5 years between Rs235-125. The counter has many interesting stories – from FY2010 till Dec 2021 the company recorded a whooping Rs 1,69,600 crore profit and gave continuously a dividend yield of average 8.5 per cent. Ironically its marketcap is just above Rs one lakh crore. In such a volatile market when overvalued stocks are getting a good beating, to balance one’s portfolio Coal India could be the best option.

Jagsonpal Pharmaceuticals specialises in developing and manufacturing bulk drugs and pharmaceutical formulations. On TTM basis its numbers are wonderful – with sales Rs 217 crore, operating profit Rs 30 crore and net profit Rs 25 crore, these are highest in its history. It is very aggressive in distribution and recently entered into an agreement with Suvinys Developers for supply of Product Dydrogesterone. In the bad market scenario it is performing well and making a new high which shows its inherent strength. Can be a good pick from pharma sector.

Om Infra has seen very good volume last week after it bagged a prestigious order from the Government of Uttar Pradesh in the water distribution segment. It is a prominent EPC Company in water, irrigation and hydroelectric projects and almost debt free. The stock is trading at 0.66 times its book value and with robust order book of more than Rs.2500 crore in hydro mechanical components the Company is developing luxury group housing in Jaipur named ‘Pallacia’ at prime location. The infrastructure growth in country poses huge potential of growth for Om Infra in next 5 -10 years.

Schaeffler India has announced an investor-friendly guidance wherein the company said it will give 30-50 per cent of its profit as dividends in future. It also posted good Q3 numbers clocking 20, 25 and 35 per cent increase in its sales, operating profit and net profit respectively although auto sector as whole didn’t perform well. Being a debt free MNC it follows the calendar year and for full year its sales, operating profit and net profit were Rs 5561 crore, 977 crore and Rs 629 crore respectively which is highest ever in its history. With hardly 5.53 per cent stake with public the counter can be kept in watch list as it is certain to post steady performance in long run.

Deep Polymers board has approved Bonus Shares in ratio of 4:3 (i.e. three bonus shares for every four held). The company is engaged into manufacture of antifab-filler with ultra-modern machinery and accredited by international standards. It is setting up a new State of Art Unit at Gandhinagar, and has shortlisted Germany based M/S. Coperion GmbH, Theodorstrasse, and Stuttgart, as machinery suppliers. The company has already acquired land in Hajipur Industrial Area, Gandhinagar and the project is likely to get commissioned in next 6 to 8 months. Good candidate to watch out as the new unit will be fueling its growth.

Our regular readers will recollect that sometime back we discussed the performance of some of the new age companies which came out with IPOs and trading well below their IPO price and the corrections are still continuing. To continue the same we’ll discuss this time PB FINTECH, well-known as POLICY BAZAAR. Another beneficiary of the fueled-IPO frenzy its IPO priced at Rs 980 was listed on November 17, 2021 at Rs 1470, now trading at almost half at Rs 750. Many eyebrows were raised when a week back its co-founder sold shares worth Rs 236 crore at Rs 825, well below the IPO price. Continuously posting losses since 6 years it never made any profit. Even around Rs 613 crore losses it has incurred in last 9 months alone and its marketcap has come to almost half of its high of Rs 34,000 crore. Here again the retail investors are caught off-guard. The sadistic pleasure-seekers may say that they deserve it since one shouldn’t put his hard earned money in companies which only has the claim on futures and nothing to showcase from the past or present. After all future is always uncertain.

UNIVASTU, the Pune-based infra company made a new all-time high on last Friday when even biggies were falling apart. In one week alone it gave 23 per cent returns with highest ever volume on weekly basis. Sources say the management is coming out with shareholder-friendly liberal rights issue to collect Rs 10 crore. Since the company was first listed on NSE SME Emerge and later migrated to NSE main board it is not known to many. The counter has been consistently recording good operating profit – Rs 6 crore in 2018, Rs 11 crore each in 2019 & 2020, and Rs 20 crore in 2021. On 9 months basis its sales, operating profit and net profit were up by 78, 46 and 135 per cent respectively. With 28.7 per cent ROCE and 33.6 per cent ROE it is trading at only 9.5 PE, thus can claim to be the cheapest infra stock.