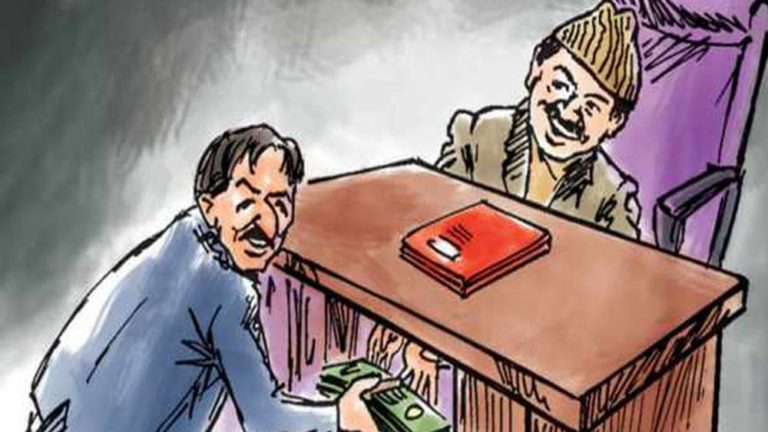 Ramchandra Markad, Rajendra Lokhande and Kiran Sonawale, in that order of hierarchy, are employed in a state government department. The names are fictional but they’re like millions others in the state government service, they are public servants. No one is liable for any misfeasance committed by other. Together, by their active but invisible collusion, they create an environment in the government office by which citizens find it impossible to get any service from them, except of course in exchange of bribe.

The bribe varies in form and size depending upon the nature of the service babus render. And they hide behind each other’s ears. Bribe could accepting money by hand or through a contract to a relative or “refusal to take action on complaints” against fraudsters, which has been classified as a method of corruption by the anti-corruption bureau.

But these society parasites are unlike millions others employed in the private corporations, because private employees and their principals, employer owners or corporations are liable for vicarious liability. The self-decorated public servants are not liable for any actions, omission or commission, of their subordinates. In fact, the government babus who are paid salary by the tax-payer public find perfect shelter under the state rules and treat with contempt the public whom, in the first place, they are supposed to serve.

Vicarious Liability deals with cases where one person is liable for the acts of others. He who does an act through another is deemed in law to do it himself. So in a case of vicarious liability, the person at whose behest the act is done as well as the person who does the act, both are liable. Thus, employers are vicariously liable for the torts of their employees that are committed during the course of employment. The reasoning is that every act done by a servant in the course of his duty is regarded as done by his master’s order, and, consequently it is the same as if it were master’s own act.

But government babus are the exempted species. Even though their service rules require them not to misuse their official position; not take decisions in order to derive financial or material benefits for self, family or friends; and refrain from doing anything contrary to law, rules, regulations and established practices. In fact, they massively abuse the draconian provision under section 353 of the IPC through which they routinely terrorise members of public demanding service from them for which they and their office exist.

Babus are able to exploit official situation to their advantage because of lack of clearly defined elements required for imposition of vicarious liability in government services – that of relationship between superior and subordinate, tortious act of negligence committed and within the course of employment. This makes it easier for public servants to throw through the window their responsibilities to the public and indulge in criminal corrupt acts of depriving public of their rights.

Its high time public must loudly question the standard of service by government babus and the legislature must redefine vicarious liability laws to include public servants in all cadres and grades.