When R entered in Rajya Sabha 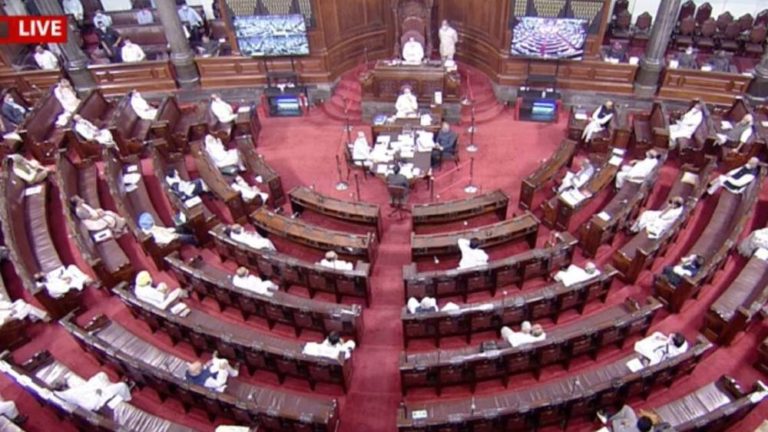 As was already expected from them, considering the number of scrupulous characters becoming a Rajya Sabha MP last few years, they, with their unruly conduct, did it what they had been practicing outside lowering the dignity of the House. In the Monsoon Session some of them climbed on the table and threw file at Chairperson. Creating ugly scenes have become a daily practice. Also as expected they don’t feel shame.

Latest case is of Congress MP Pratap Singh Bajwa. After his unruly act he said he will not apologies for his behavior and “I will do it 100 times…(I) threw the file so that the Rajya Sabha chairman can read it. I have not committed any crime and have no regrets.” The most important fact should not go unnoticed that for their stupid acts they are richly rewarded and appreciated by their high command. The behaviour of Congress, TMC and AAP members have proved that this House must be scrapped as early as possible.

Rajya Sabha has been seen as the backdoor entry for the politicians who have lost the general elections. It has become a haven for crony capitalists, compromised journalists and party fundraisers. The legal protection parliamentary privilege affords the members making them behave like Moguls – too much privilege, too little accountability. Three prime ministers have been elected to the Rajya Sabha without having to face the electorate. It is clearly an anti-democratic way.

Several times the Rajya Sabha had been adjourned for lack of quorum. Beside this, Rajya Sabha is being manipulated to curtail and delay the various laws made by the Lok Sabha just for political gains, hence proving to be a major hindrance in the speedy legislative process. Even the ruling party too is not an exception. There were many absentees in Rajya Sabha during the passage of the Tribunals Reforms (Rationalisation and Conditions of Service) Ordinance, 2021 bill. The Bill will replace an ordinance and abolish several appellate tribunals, to end retrospective tax. The absence of BJP Rajya Sabha MPs during the passage of this crucial bill has not gone well with PM Narendra Modi. Taking strong exception he has asked the Parliamentary Affairs minister to make a list of the MPs who were not present in the house.

The Upper House traces its direct history to the first bicameral legislature introduced in British India in 1919 as a consequence of the Montagu-Chelmsford reforms. Parliament records state that bicameral question was raised in the Constituent Assembly by Professor Shibban Lal Saksena who said: “In this motion, we have been asked to vote for two Houses, the Lower House and the Upper House. I wish to point out that our experience has been that “the Upper House acts as a clog in the wheel of progress. I think that everywhere in the world the experience about Upper Houses has been the same. It has always acted as a sort of hindrance to quick progress.”

In India, let us accept the fact that the Upper House is more symbolic, cosmetic and has lost its relevance. Times have changed. Old rules are no longer valid. For transparent governance, India needs to abolish certain institutions, reform others and create new ones. Rajya Sabha is one such frail institution that is no more required to preserve federal nature, the very idea with which it was created.

Even the nominated members don’t take the House seriously. Not long ago, the then Samajwadi Party leader Naresh Agarwal had attacked cricketer Sachin Tendulkar and actor Rekha, asking them to resign if they are not interested in the Parliament. Records show that while the national average attendance of an MP, then was 78%, Sachin Tendulkar’s average as an MP was 7% and Rekha’s average 5%. Prior to them Lata Mangeshkar who was a Rajya Sabha MP from November 1999 to 2005, attended merely six out of over 170 meetings. When asked, she claimed that she had in fact pleaded with those who urged her into the Rajya Sabha to let her off; but then why did she accept the offer.

The problem is, it is virtually impossible to abolish the Rajya Sabha without adopting a new Constitution. Montagu- Chelmsford established the structure in 1919 and since then changes have been scant. Now a century old institution has lost its purpose. Till it is not abolished completely one useful reform step would be to have members of the Rajya Sabha be directly elected by the citizens of a state.

It seems Rowdyism is a major characteristic of Rajya Sabha.