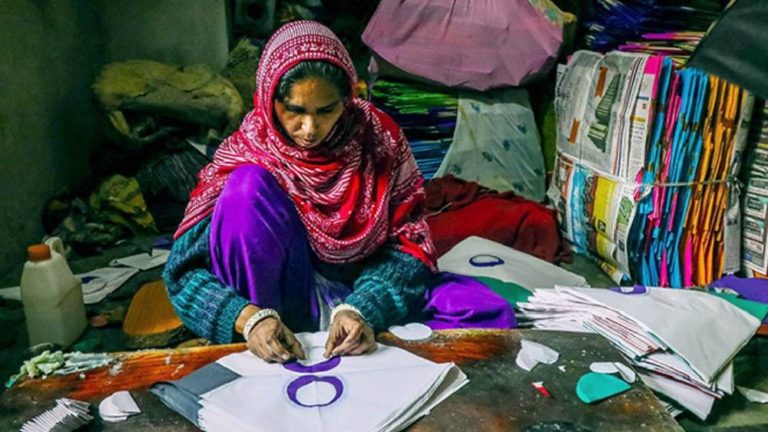 There is abundant talk of tapping the ‘demographic dividend’ that could take India to a higher level of sustainable growth. Typically, this term is merely used to refer to the potential of the country’s youth. But there is one more Indian demographic which lies untapped – women. Within the large and growing universe of MSMEs in India, there is immense scope and potential for greater contribution from women-led MSMEs.

According to Statista, in FY2021, women owned a little over 20% of all MSMEs across India. Furthermore, women had the highest share of micro businesses within business sizes, with more enterprises in rural areas than urban parts of the country during that financial year.

Hurdles on the Path

There are various economic and socio-cultural factors that constrain women led MSMEs. In terms of economic constraints, the top three factors are typically securing timely and adequate capital to run and grow their businesses, managing business operations and securing reasonable credit days from vendors/suppliers. IFC states that when it comes to access to credit, the financing gap is the largest for the women-owned ‘very small enterprises’ (WVSE) segment in India, which even banks and microfinance institutions have been unable to address.

Many women entrepreneurs are keen to approach banks and formal financial institutions for their funding needs. However, they are unable to benefit from capital and lines of credit due to the absence of a credit history and a lack of acceptable collateral. More pertinent than the lack of credit access is the awareness about existing credit available from both government and non-government sources. While this is a common challenge for both men and women entrepreneurs, in the case of the latter, the finance gap is to the extent of $158 billion, according to IFC. As a result, around 90% of such women turn to informal sources of financing, which handicaps their ventures severely.

Beyond finance, for women led MSMEs to actually flourish and grow, they require a complete ecosystem of mentoring and business support, which can level the playing field with men entrepreneurs on a more social and cultural basis. According to experts, women entrepreneurs are often faced with unconscious biases, challenges in building a network, lack of safety in public spaces, sometimes lack of support from family, lack of child-care options, often lack of confidence in their own skills in business, etc.

Acknowledging all the economic and socio-cultural obstacles in the path of women entrepreneurs, both government and non-government organisations have been working towards clearing these. With the help of technology and innovative structuring of loans, it is now possible for women entrepreneurs to avail credit from formal financial institutions, albeit at steep rates. A relatively new breed of fintech companies has made it possible for lenders to use algorithms and proxy variables that assist in gauging the creditworthiness of women, without credit histories. At the same time, new-age credit products make it possible to draw women MSMEs into the formal financial sector as they use insurance backing and other surrogates in place of collateral.

With respect to awareness about the availability of credit, once again technology is playing an empowering role. The penetration of internet connectivity and smart phones, coupled with the evolution of video messaging on social media, AI, translation technology, etc. has enabled lenders to reach out to women entrepreneurs. Until now, this technology still requires human intervention at some point but initial hurdles have been surmounted.

Going beyond finance, to ensure that women have access to nurturing and mentoring, on International Women’s day in 2018, the Ministry of Medium, Small and Micro Enterprises launched Udyam Sakhi, a network for nurturing social entrepreneurship and creating business models revolving around low-cost products and services to resolve social inequities.

The portal offers entrepreneurship learning tools, incubation facilities, training programs for fundraising, providing mentors, one-on-one investor meets, market surveys and technical assistance, amongst others, to women entrepreneurs. Here again, to bring women into the network typically still requires hand-holding through the registration process and human support until they find their feet in the system. 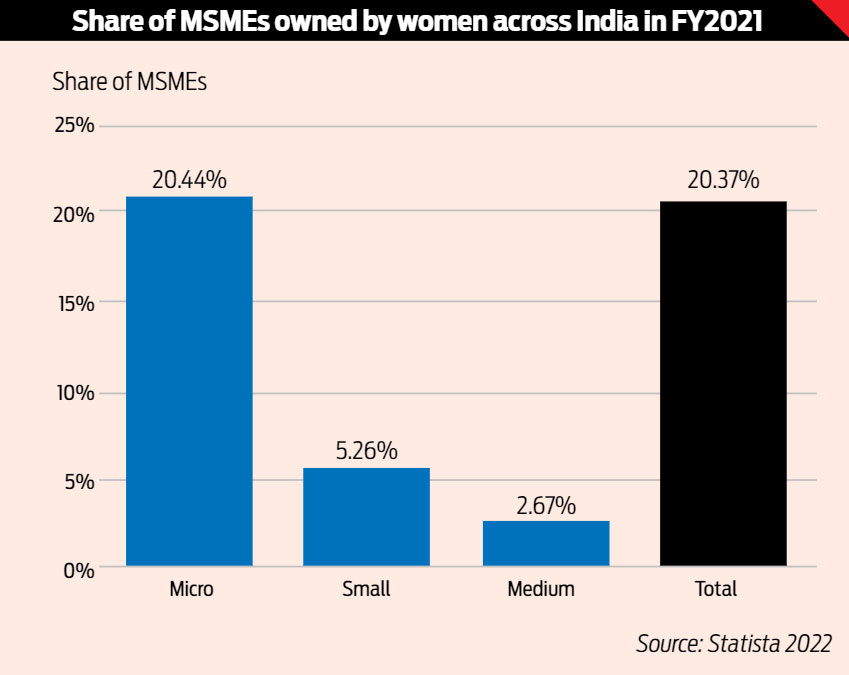 It is heartening to note that the number of women-led MSMEs in India increased from 2.15 lakh to 1.23 crore in just a decade. Their share in all MSMEs has also increased from 13.72% in FY2011 to 20.37% in FY2021. Hopefully, there will be acceleration in these rates in the near future with government and non-government institutions leveraging technology to reach out to women entrepreneurs.

Currently, women-owned enterprises are overwhelmingly single person enterprises, which provide direct employment to an estimated 22 to 27 million people. According to a 2019 study by Bain & Company, titled ‘Powering the economy with Her – Women entrepreneurship in India’, accelerating the quantity and quality of entrepreneurship towards benchmarks achieved by high performing countries can create over 30 million women-owned enterprises, of which 40% can be more than self-employment. This can generate potentially transformational employment in India, of 150–170 million jobs, which is more than 25% of the new jobs required for the entire working age population, from now until 2030.

The report goes on to suggest four opportunity areas to unlock the potential of women and entrepreneurship in India:

At a broader level, empowering women can only do wonders for the nation. Representing around 50% of the population, women have demonstrated that they actually have better risk profiles. As a result, rather than holding a bias towards women entrepreneurs, financial institutions should perceive a clear business case to consider them as a favourable market opportunity.

At a socio-cultural level, when a woman runs an enterprise, her income is more likely to be spent constructively, towards driving sustainability of the enterprise, increasing the family’s standard of living and ensuring education for the next generation. This can provide India with the grass-root level fillip that will enable the Asian elephant to leap over the chasm that separates developed and developing nations. 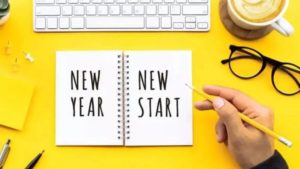 So, what’s your new year’s resolution? 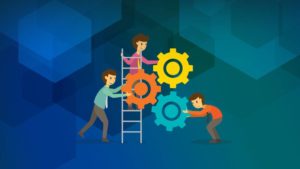 Innovators will pursue solutions that are sustainable