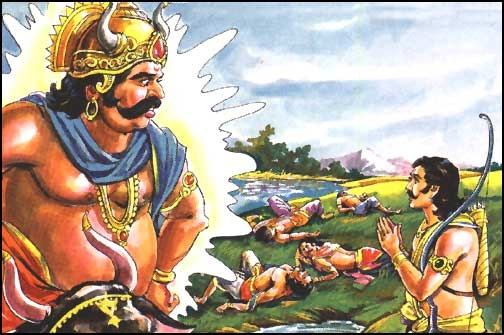 Once a Sufi, on his way to Baghdad, saw the Plague riding on a black steed. He stopped it and asked, “Your very presence is enough to butcher people. Where are you bound?”

The Plague replied, “On my way to Damascus. I am assigned to kill ten thousand people”.

A few days later the Sufi was informed of a terrible epidemic that had swept away thirty thousand people in Damascus.”

A few more days later, the Sufi happened to meet the Plague again. “You liar! You said you would kill only ten thousand in Damascus. How is it those thirty thousand persons have died?”

“O Sage! I have kept my word. I killed only ten thousand people. Fear killed the others.”

Fear is more than an epidemic. The greatest of all killers is Fear. It is not inborn. It is imbibed. It is thrust by others, especially the affectionate and caring mothers in the first round. They are the people who show fear to their tiny-tots, bring them up in fear and allow them to rot in fear. They are the people who frighten them of the dark and so the moon turns them into loonies. They tell all sorts of cock and bull stories to their brave hearts so that they would not be out of their sight.

They begin with creepy-crawlies and then move on to one and a half eyed giant, lurking in dark corners waiting to gobble up the unruly child.

Once fear is created, it takes a long time to get rid of it; sometimes it becomes an impossibility. All fear creating attempts lose their hold when the target begins to think. But how many children think these days, when they foolishly believe that their elders think for them? And if at all they think their thoughts are nipped in the bud.

This may be the reason why there are so many phobias that decorate the Dictionary. All these phobias water down to the greatest of all fears – Fear of Death.

A Burmese proverb reads: “When the floods come up the fish eat ants; when the floods go down the ants eat fish.” Either way it is death, though told in different words.

It is this fear of death that kills us every day. It is said in jest that at night Death moves towards us and in the daylight we move towards Death. How true!

When Death in inevitable, why fear death?

Heard of the sibyls! It is a name given to women, in Greek and Roman cult, endowed with prophetic gifts under the god Apollo. The most well-known of these sibyls was Sibyl of Cumae in Campania, Italy.

This Sibil of Cumae begged of Apollo to fulfill her wish to live forever in her body. The Great God too granted her wish. He said, “You will have as many years as there are particles in a handful of dust.”

Sibyl was happy, but she forgot to ask the god for perpetual youth and so she aged and shrunk. Poor Sibyl! She had no other option but only wish for death. But Death could not go anywhere near her, for was she not blessed with immortality? What a death in life she was destined to lead? Prolongation of life has always been considered futile unless accompanied by youthfulness.

Death, of course, destroys every living being. But what keeps them alive is the idea of Death.

A young woman once ran to the Buddha and cringed before him to bring back her dead son. The Buddha saw the body of the dead child and in a compassionate manner asked her to bring a handful of mustard seeds from any house that has not known death.

With faith in the Buddha and belief in his assurance she ran from door to door to fulfill his apparently simple condition. But when she failed in all her attempts, she woke up to the grim fact that there was no house that could boast of perennial life. That flashed a message across her mind. “Death as a fact has been attached to all life upon earth.”

That anecdote catapults us to the Mahabharata, where Yaksha poses a question to Yudhisthira: “What is the most surprising phenomenon?”

Yudhisthira replied. “Every moment death is claiming people. Yet those living conduct themselves in such a fashion as if they were never to die! What could be more surprising than this?”

Emperor Wu Ti of China’s Han Dynasty (2nd century B.C.) devoted his entire life to the discovery of escaping from old age and death. He with every sense of duty obeyed the words of a magician and laboured his way to the top of a hard-to-climb mountain from where, he was told he could see the ‘Isle of the Immortals.” In spite of performing numerous rites, he died a heart-broken man. And his last words were: “I was stupid to believe the dishonest magicians. They made me their toy. They cheated me. There are no immortals.”

People who are afraid of death never begin to live.