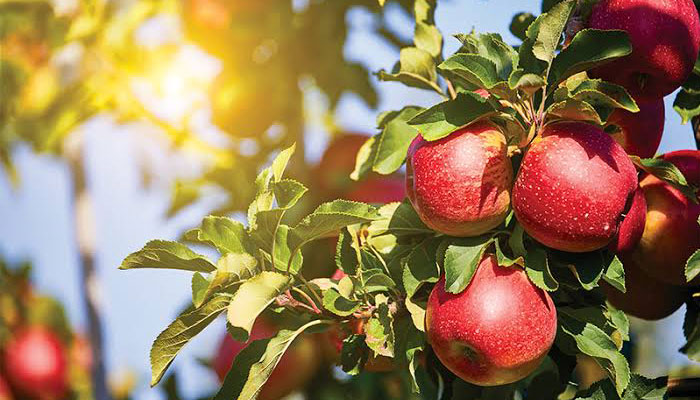 The very word apple makes scientists think of Newton and his laws of gravitation; learned men, the fall of uxorious Adam. For the laymen, the fruit means what we see in a fruit-stall. The apple is considered to be a very ancient fruit, since it is mentioned in one of the most ancient books, The Bible. No one knows what pulpit preachers and commentators of the Bible think of the apple in particular as the fruit of the ‘Tree of Knowledge’. And here, we are forced to conjecture, if the proverb “An apple a day drives the doctor away” had made them think so. Whatever may be the reason, botanists aver that apple is an ancient fruit born with Adam and Eve.

The apple played a vital role in art, language, literature, mythology and science. The fruit enriched the English language by donating a large number of words. For example, the potables like Apple-Jack, Apple-John and Apple-brandy, and eatables like Apple-butter, Apple-sauce, and Apple-pandowdy get their names from the apple. The English tongue abounds with apple idioms which are very tasty for those who know how to eat it. Apple-pie order (perfect order); Apple-squire (a pimp); Apple-wife (a woman who sells apples); Apple-knocker (one beginning a new Job); Apple-sauce (nonsense, insincere flattery); to upset the Apple-cart (to throw plans in confusion); Apple of Sodom or Dead Sea Apple (any fair but disappointing thing); Apple-polisher (one who seeks favours by gifts); Apple-pie-bed (a tricky bed); Apples of Ishtakhar (all sweetness on one side and all bitterness on the other). The apple has given its name to many worms and insects like Apple-blights, Apple-aphid, Apple-bee, Apple-flea-weevil, Apple-maggot, Apple-red-bug, etc. for the Phylum Arthoropoda love to caress the chubby cheeked fruit.

From the Garden of Eden, the apple travelled all the way to Greece, on foot, for there was no other means of conveyance at that time. When it reached Greece, it changed colours. It became golden. Golden apples appear more than once in Greek mythology. First in ‘Atlanta Race’ where Atlanta lost her wager and thereby herself to Meilanion (Hippomenes) when she stooped to pick up the three golden apples dropped by him. Secondly, it posed an ordeal to Hercules. In one of the twelve labours entrusted to him was to obtain the golden apples from the Garden of Hesperides. Thirdly, it gave the idiom ‘Apple of Discord’ (a cause for dispute) and vanished from Greece.

It next went to Scandinavia and became the food of the Gods. (Scandinavian mythology). The Scandinavian gods by eating apples preserved their youth. And so the idiom ‘Apples of Perpetual Youth’. Having obtained the title ‘Apple of Perpetual Youth’ the apple went in search of the harem in Arabia. There, somebody trapped it and Prince Ahmed purchased it (Arabian Nights Story) at Samarkand and used it for curing every disorder. Thus the idiom ‘Prince Ahmed’s apple’ meaning any balm that cures every disorder.

The adventurous apple swiftly went to Switzerland, where Gessler, the imperial Governor snatched it and placed it on the head of William Tell’s son. There the apple sat trembling for William Tell (a post-graduate and doctorate degree holder in archery) was sentenced to shoot at it with his bow and arrow, when he refused to salute the cap of Gessler. William Tell succeeded in that dangerous trial but the apple was blown to pieces. Thus the immortal apple became a part of William Tell’s life, the legendary hero of Switzerland.

Having played its full role in language, literature and legend, the apple thought that its mission would be incomplete if it failed to find a place in science, at least in the life of a scientist. So, the apple fell from the tree on Newton’s nose (chosen man) and inspired him to discover the laws of gravitation. If there would have been no apple in the world students would not have had to face the ordeal of mugging up the laws of gravitation. And Newton would not have found out his laws of gravitation if we imagine a coconut in the place of an apple. Do you think he would have ruminated over the cause? He would have rushed to the hospital with a bleeding nose cursing the coconut and its creator.

This immortal fruit continues to hold a unique place. Even if all the apple-trees in the world are cut down and no trace of it is found, we will study about the apple and ‘Apple-picking’ as long as language and literature remain under the sun and the moon.

About the author: P. Raja
P.Raja (October 07, 1952) a son of this divine soil, Pondicherry, India famed for its spiritual heritage, writes in his chosen language, English, and also in his mother tongue, Tamil. More than 5000 of his works – poems, short stories, interviews, articles, book reviews, plays, skits, features and novellas – have seen the light through newspapers and magazines that number to 350 in both India and elsewhere. He has 30 books for adults and 8 books for children in English and 14 books in Tamil. Apart from contributing special articles to Encyclopedia of Post-Colonial Literature in English (London), Encyclopedia of Tamil Literature in English, and to several other edited volumes, he has also written scripts for Television (Delhi). He broadcasts his short stories and poems from All India Radio, Pondicherry. He was General Council Member of Central Sahitya Akademi, New Delhi (English Advisory Board - 2008-2012) representing the Pondicherry University. He is Editor of TRANSFIRE, a literary quarterly devoted to translations from various languages into English. His website: www.professorraja.comAuthor can be reached at [email protected]

Oh! What Is It That The Ancient Tamils Did Not Know?

Blessed Is He That Considers the Needy

Are well-meaning measures to revive MSME falling short of requirements?

Since its inception in 1985, UFlex has been continuously creating new products for the changing times. Today UFlex… https://t.co/plTIi7dMDG

Indian Railway Finance Corporation's IPO will open on January 18 and close on 20. The price band is Rs 25-26