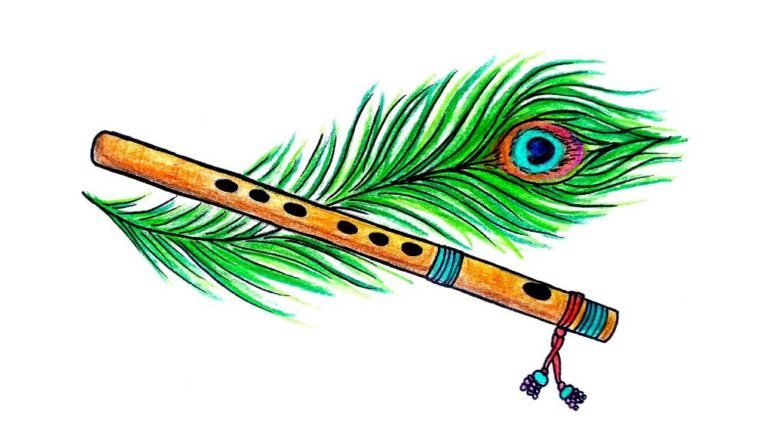 The most celebrated hero of Indian mythology and history, Lord Krishna was the eighth incarnation of Vishnu. The Vaishnavites call him their lover-god for when he was quite young in Vrindavan, he captivated the hearts of the gopis (cowherdesses), married and unmarried. Legends galore speak of his innumerable love affairs with the gopis, who without any exception fell in love with him. Whenever the Lord played his flute at night, the gopis deserted their parents, husbands, and children and rushed to see him in the forest. There they danced the famous dance known as rasalila. The Lord divided himself into as many men as there were women wanting to dance, thereby creating in each woman the illusion that she was the woman the Lord had chosen to dance with. This scene is often depicted in art, showing a circle of women dancing, each with Krishna. The love of the gopis, the spiritualists aver, may not be viewed as sensuous and carnal but as the renunciation of the world and the breaking of all ties that bind the soul to the world.

In art, Lord Krishna is usually represented as playing on his flute. Hence, he is also known as Venugopal, venu meaning flute. His notes on the flute are symbolic of the expression of his love for humankind. But this is not to say that bovines did not like to listen to his notes. In fact, during the morning hours when the cows were busy grazing in the fields they forgot all about their fodder and moved fast towards the Lord when he played his tunes under a nearby bushy tree lying cross-legged. Not only the bovines but also leafy trees and bushy plants listened to him in rapt attention all the time dancing to his tunes. Krishna’s only counterpart in world mythology was the Greek hero Orpheus who did all these with his lyre. What was flute for Krishna was lyre for Orpheus. They were experts in melting the stone hearts too with their music.

A single hollow shaft of bamboo with the thickness of a human thumb and with seven finger holes drilled in it passes for a flute. The index, the middle, and the ring fingers of the right hand cover the outer finger holes, while the same fingers of the left hand cover the rest. Supported by the thumb and the pinky and positioned close to the lips, air is blown over it. Played horizontally slanting downwards towards the right by the player the seven burnt holes of the flute produce the seven basic swarams –  sa, re, ga, ma, pa, dha, ni. Bansuri, murali, kuzhal, bansi, basari, baanhi, baashi, are the several names attributed to the Lord’s flute.

The gopis were ever jealous of that lucky instrument. It was always with the Lord, either tucked to his hip or to his headgear or to his lips. No wonder that they longed for such a union with the divine.

An interesting folktale speaks of the glory of Bansuri. “O Blessed flute! What laudable deeds have you performed to reach the most coveted spots in the Lord’s corporeal structure, especially the lips?” asked the jealous wind that occasionally hugged the Lord. The flute replied, “O Wind! Before I became a flute, I was just a bamboo stem, deep rooted to the ground. I was the target of the sun and the rain. Yet with yogic patience, I stomached all the misfortunes. One day I was uprooted, cut, and pierced seven times. Imagine my suffering. I was all the time undergoing severe ordeals. Now I am blessed to be with the Lord. Yet I am nothing without the Lord’s breath. I am hollow and empty. The Lord breathes life into me and I sing as per his wish. To make matters simple, all this happened because of my complete surrender to the Lord”. A simple folktale with a deep meaning.

Who made the flute for Krishna? Another folktale finds an answer for us. When Lord Krishna became an earthly being, several celestial beings came down to the earth time to time to have darshan of their favourite Lord. Once Lord Shiva too desired to meet his beloved god. He wanted to gift something that would always remain close to Krishna. What came to his mind was the bones of Sage Dadhicha. The Puranas and the Mahabharata speak at length of the power and glory of the sage’s bones as more effective weapons than thunderbolts. The sage devoted himself to death to donate his bones to Lord Indra to destroy the Asuras. Hence Lord Shiva who had one of Dadicha’s bones, made a beautiful flute out of it. Reaching Gokulam, Siva presented the bone flute to Krishna. Delighted with the blessed gift, Krishna rarely kept it away from him.

Lord Krishna is the God of Love, an ideal of divine love. This love expresses itself by entering into man and filling his whole being. Hence the flute is symbolic of the human heart. A hollow heart is bound to become a flute for the God of Love to play upon. No wonder that the flute, beloved to Lord Krishna, became a special attraction to his admirers and devotees.