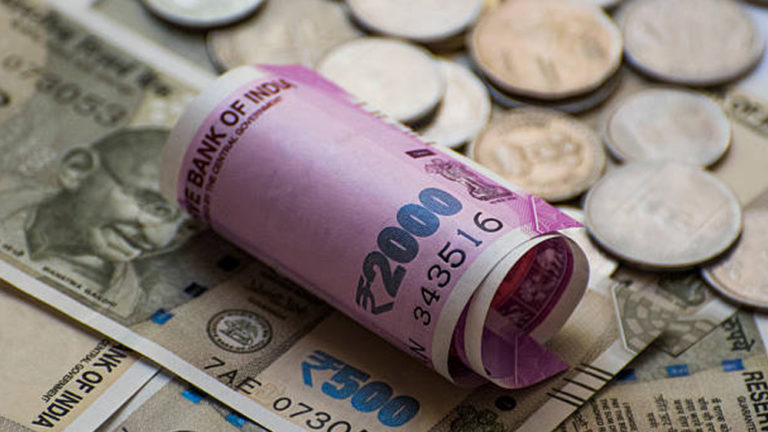 India’s real GDP to record a growth of 11 per cent in 2021-22 and nominal GDP by 15.4 per cent-the highest since independence. The V-shaped economic recovery is supported by the initiation of a mega vaccination drive with hopes of a robust recovery in the services sector and prospects for robust growth in consumption and investment. The Union Minister for Finance & Corporate Affairs, Smt Nirmala Sitharaman presented the Economic Survey 2020-21 in Parliament today, which states that the rebound will be led by the low base and continued normalization in economic activities as the rollout of COVID-19 vaccines gathers traction. The fundamentals of the economy remain strong as gradual scaling back of lockdowns along with the astute support of Atmanirbhar Bharat Mission have placed the economy firmly on the path of revival. This path would entail a growth in real GDP by 2.4 percent over the absolute level of 2019-20-implying that the economy would take two years to reach and go past the pre-pandemic level. These projections are in line with IMF estimate of real GDP growth of 11.5 per cent in 2021-22 for India and 6.8 per cent in 2022-23. India is expected to emerge as the fastest growing economy in the next two years as per IMF.

The Survey says, India’s GDP is estimated to contract by 7.7 per cent in FY2020-21, composed of a sharp 15.7 per cent decline in first half and a modest 0.1 per cent fall in the second half. Sector-wise, agriculture has remained the silver lining while contact-based services, manufacturing, construction were hit hardest, and have been recovering steadily. Government consumption and net exports have cushioned the growth from diving further down.

As anticipated, while the lockdown resulted in a 23.9 per cent contraction in GDP in Q1, the recovery has been a V-shaped one as seen in the 7.5 per cent decline in Q2 and the recovery across all key economic indicators. Starting July, a resilient V-shaped recovery is underway, as demonstrated by the recovery in GDP growth in Q2 after the sharp decline in Q1. As India’s mobility and pandemic trends aligned and improved concomitantly, indicators like E-way bills, rail freight, GST collections and power consumption not only reached pre-pandemic levels but also surpassed previous year levels. The reignited inter and intra state movement and record-high monthly GST collections have marked the unlocking of industrial and commercial activity. A sharp rise in commercial paper issuances, easing yields, and sturdy credit growth to MSMEs portend revamped credit flows for enterprises to survive and grow. 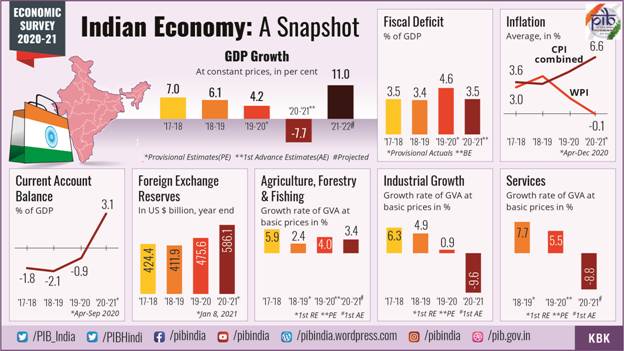 Dwelling on the sectoral trends, the Survey says that the year also saw manufacturing sector’s resilience, rural demand cushioning overall economic activity and structural consumption shifts in booming digital transactions. It adds that Agriculture is set to cushion the shock of the COVID-19 pandemic on the Indian economy in 2020-21 with a growth of 3.4 per cent in both Q1 and Q2. A series of progressive reforms undertaken by the government have contributed to nourishing a vibrant agricultural sector, which remains a silver lining to India’s growth story of FY 2020-21.

A palpable V-shaped recovery in industrial production was observed over the year. Manufacturing rebounded and industrial value started to normalize. Indian services sector sustained its recovery from the pandemic driven declines with PMI Services output and new business rising for the third straight month in December.

The external sector provided an effective cushion to growth with India recording a current account surplus of 3.1 per cent of GDP in the first half of the year, largely supported by strong services exports, and weak demand leading to a sharper contraction in imports (with merchandise imports contracting by 39.7%) than exports (with merchandise exports contracting by 21.2%). Consequently, the Foreign exchange reserves rose to cover 18 months of imports in December 2020.

External debt as a ratio to GDP rose marginally to 21.6 per cent at end-September 2020 from 20.6 per cent at end-March 2020. However, the ratio of foreign exchange reserves to total and short-term debt (original and residual) improved because of the sizable accretion in reserves.

India remained a preferred investment destination in FY 2020-21 with FDI pouring in amidst global asset shifts towards equities and prospects of quicker recovery in emerging economies. Net FPI inflows recorded an all-time monthly high of US$ 9.8 billion in November 2020, as investors’ risk appetite returned, with a renewed search for yield, and US dollar weakened amid global monetary easing and fiscal stimulus packages. India was the only country among emerging markets to receive equity FII inflows in 2020. 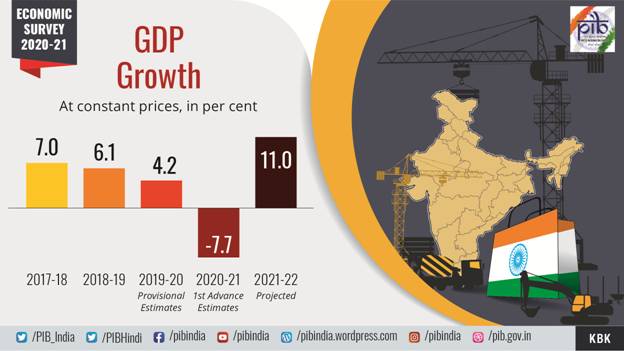 Buoyant Sensex and NIFTY resulted in India’s market-capitalisation to Gross Domestic Product (GDP) ratio crossing 100 per cent for the first time since October 2010. This, however, raises concerns on the disconnect between the financial markets and real sector.

Exports are expected to decline by 5.8 per cent and imports by 11.3 per cent in the second half of the year. India is expected to have a Current Account Surplus of 2 per cent of GDP in FY21, a historic high after 17 years.

The Survey underlines that the year 2020 was dominated by the COVID-19 pandemic and the ensuing global economic downturn, the most severe one since the Global Financial Crisis. The lockdowns and social distancing norms brought the already slowing global economy to a standstill. Global economic output is estimated to fall by 3.5 percent in 2020 (IMF January 2021 estimates). In view of this, Governments and central banks across the world deployed a range of policy tools to support their economies such as lowering key policy rates, quantitative easing measures, loan guarantees, cash transfers and fiscal stimulus measures. India recognized the disruptive impact of the pandemic and charted its own unique path amidst dismal projections by several international institutions of the spread in the country given its huge population, high population density and an overburdened health infrastructure.

The Survey observes that the intense lockdown implemented at the start of the pandemic – when India had only a 100 confirmed cases – characterized India’s unique response in several ways. First, the policy response was driven by the findings from both epidemiological and economic research. Specifically, faced with enormous uncertainty about the potential spread of the pandemic, the policy implemented the Nobel-prize winning research in Hansen and Sargent (2001) that recommends a policy focussed on minimising losses in a worst case scenario. Faced with an unprecedented pandemic, loss of scores of human lives captured this worst case scenario. Moreover, epidemiological research highlighted the importance of an initial, stringent lockdown especially in a country where high population density posed difficulties with respect to social distancing. Therefore, India’s policy humane response that focused on saving human lives, recognised that the short-term pain of an initial, stringent lockdown would lead to long-term gains both in the lives saved and in the pace of the economic recovery. The scores of lives that have been saved and the V-shaped economic recovery that is being witnessed bear testimony to India’s boldness in taking short-term pain for long-term gain.

Second, India recognised that the pandemic impacts both supply and demand in the economy. The slew of reforms – again unique amidst all major economies – were implemented to ensure that the supply-side disruptions, which were inevitable during the lockdown, are minimized in the medium to long-run. The demand side policy reflected the understanding that aggregate demand, especially that for non-essential items, reflects precautionary motives to save, which inevitably remains high when overall uncertainty is high. Therefore, during the initial months of the pandemic when uncertainty was high and lockdowns imposed economic restrictions, India did not waste precious fiscal resources in trying to pump up discretionary consumption. Instead, the policy focused on ensuring that all essentials were taken care of, which included direct benefit transfers to the vulnerable sections and the world’s largest food subsidy programme targeting 80.96 crore beneficiaries. Government of India also launched Emergency Credit Line Guarantee Scheme to provide much needed relief to stressed sectors by helping entities sustain employment and meet liabilities.

During the unlock phase, when uncertainty declined and the precautionary motive to save subsided, on the one hand, and economic mobility increased, on the other hand, India has ramped up its fiscal spending. A favorable monetary policy ensured abundant liquidity and immediate relief to debtors via temporary moratoria, while unclogging monetary policy transmission. India’s demand-side policy, thus, underscores the idea that pressing on the accelerator while the brakes are clamped only wastes scarce fuel.

The year 2020 threw at the world a bedlam of novel COVID-19 virus, threatening all that was taken for granted –mobility, safety, and a normal life itself. This, in turn, posed the most formidable economic challenge to India and to the world in a century. Bereft of a cure or a vaccine, public health policy became central to tackling this all-pervasive crisis. The imperative of flattening the disease curve was entwined with the livelihood cost of an imminent recession, which emanated from the restrictions in economic activities from the lockdown required to contain the pandemic. This inherent trade-off led to the policy dilemma of “lives versus livelihoods”.