A salesman, always a salesman 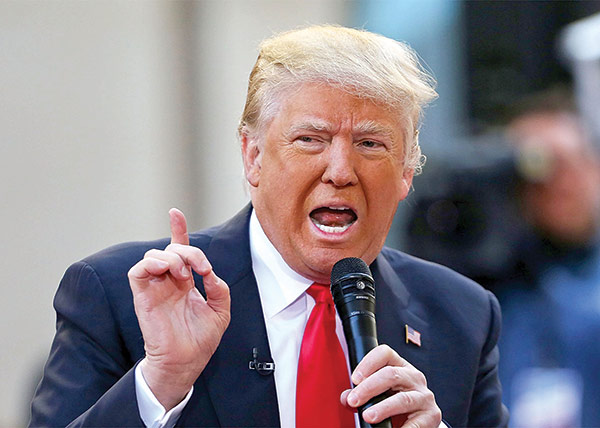 The world knows Donald Trump first as a successful businessman and then the US President. And he too takes the fact very seriously, never allows the later to come on the way to his first love. He is right now on a trip to Japan, South Korea, China, Vietnam and the Philippines looking to win support for ramping up sanctions on North Korea, in a bid to deprive the country of resources and coerce leader Kim Jong-un into abandoning his nuclear weapons programme.

After meeting Japan’s Prime Minister Shinzo Abe, Donald Trump tweeted: “I am allowing  Japan and South Korea to buy a substantially increased amount of highly sophisticated military equipment from the United states.” He did not stop here because he knows it well that the second part of salesmanship is to say something great about the product.

So while answering questions at a press conference, Mr Trump said Mr Abe was “going to purchase massive amounts of military equipment” from the US. He said Mr Abe could “shoot them (North Korea’s missiles) out of the sky” when he completed the purchase as he should. And we make the best military equipment by far.” And here comes the third part of a good salesmanship. Mr Trump said it would provide jobs to Americans as well as “safety for Japan”. The emotional quotient, necessary as the last resort.

And before Mr Abe could react a deafening salvo of shots rang out. The US President reminded “We want fair and open trade. But right now, our trade with Japan is not fair and it’s not open. The US has suffered massive trade deficits with Japan for many, many years. Many millions of cars are sold by Japan into the United States, whereas virtually no cars go from the US into Japan.” The Japanese Prime Minister must have been speechless after this logic because Japan has a very healthy business relationship with US. A cool-headed Mr Abe said he was considering such a deal, adding that Japan had to qualitatively and quantitatively enhance its defence capability, given the very tough North Korea situation. Japan does not have a standing army, but instead maintains a self-defence force, under its post-war pacifist constitution, which Mr Trump knows Mr Abe has been seeking to revise.

On the other side, North Korean state media has accused Mr Trump of driving tensions to the extremes and said that “no-one can predict when the lunatic old man of the White House, lost to senses, will start a nuclear war” against North Korea. It was stated after two US strategic bomber planes carried out drills in the region.

Trump is expected to provide assurances to Japanese and South Korean allies that the United States will fulfill its defense commitments in the face of North Korea’s expanding missile capabilities. However, he must realize that his threats would become an obstacle to the establishment of effective dialogue channels necessary to reduce the prospects of military confrontation.

In his mission Trump needs full Chinese cooperation and enforcement of sanctions to achieve the maximum pressure required to stop North Korea’s nuclear pursuits. However, there seems to be remote chances that sanctions will force Kim Jong-un to give up his nuclear weapons or halt his missile program. North Korea seems determined to develop a clear capacity to target the US with nuclear weapons. This is going to provide ample scope for the US President to show both his salesmanship as well as the diplomatic skill.