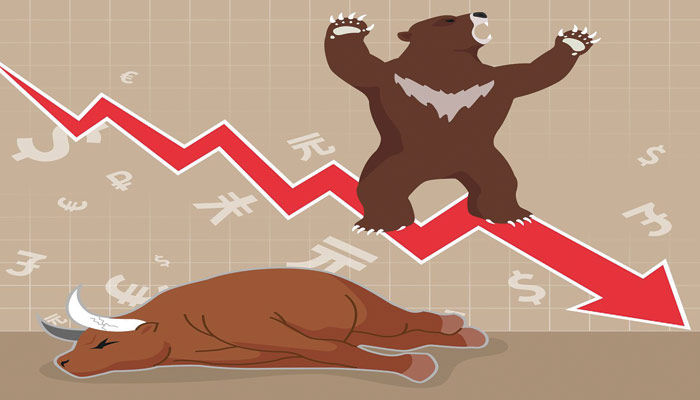 In just 22 trading sessions almost over 4,000-point fall in Sensex has made everything scary.

Reasons are several – a long list of negative news flows such as oil price rise, rupee crash and some corporate developments. The equity market has become ultra-sensitive to all these weakening macros.

The future too seems not very bright considering the state elections at domestic level – Madhya Pradesh, Rajasthan, Telangana, along with Chhattisgarh and Mizoram. In these states assembly elections will be held this quarter. The results of these state elections will definitely set the tone for the general elections to be held in May, 2019. On the global front US sanctions in Iran has taken the air from the world economy balloon.

As a result these days it’s not uncommon to find claims, predictions, and reports prepared by some really talented and wise men proclaiming – the great bull market is dead, or the time has troubling parallels to the 1930s. Latest in the list is the founder and co-chief investment officer of the world’s largest hedge fund, Bridgewater Associates, Ray Dalio, who predicted the financial crisis. So when he has something to say on the future of the market, investors of all shapes and sizes listen carefully. After all, it was Dalio who repeatedly cried foul on the mounting credit collapse more than a decade ago that triggered the worst economic meltdown in modern history.

He recently relayed his thoughts on the next economic recession, and outlined his scenario for the next recession — drawing some pointed parallels to the Great Depression. He outlined what he thought would be the next recessionary scenario to rock the global economy. He has also drawn ominous parallels between today’s economic situation and that of the 1930s — the era of the Great Depression. Dalio laid out his scenario for how the current economic cycle would end. According to him, we’ve entered the “uneasy part of the cycle in which central banks are tightening their purse strings, gradually putting an end to the accommodation that helped drive the economic recovery.” His forecast for the next recession stems from simple fact that monetary conditions are getting more restrictive.

He says that “we are about in the seventh inning of a nine-inning game. As interest rates tend to rise, if they rise faster than is discounted in the curve, it can hurt asset prices. And asset prices are fairly fully priced at this level of interest rates. At some point, we’re going to have a downturn because that’s why we have recessions. Nobody ever gets it perfectly.”

So while Dalio is sure an economic reckoning is in the cards, he’s hesitant to give it an exact timetable. But he’s still willing to venture a guess: “I think it’s maybe in two years.” To him, the economic situation that’s brewing has many close parallels to that of the 1930s. He notes that both now and in the 1930s, the lowering of interest rates to near zero has created a wealth divide. That’s because “the wealthier members of society are more exposed to financial assets, which have historically gotten the biggest boost from such easy monetary conditions. Right now, the top one-tenth of 1% of the population’s net worth is equal, about, to the bottom 90% combined. That’s very similar to the late ’30. And ultimately, these factors all combine to weaken economic prospects everywhere.

The second in line is Michael Hartnett, Chief Investment Strategist, Bank of America Merrill Lynch, who announced that the great bull market that began in March 2009 and catapulted stocks to record levels four times as high is dead. His reasons are : Excess liquidity, created by central bank quantitative easing around the world, is ending, along with the excess returns it helped create — returns that drove the longest bull market in history. Central bank “policy stimulus has peaked, after $12 trillion of asset purchases and 713 interest rate cuts,” according to Harnett.

The unfortunate truth is that an investor may know a downturn is coming, it can be perilous to try to accurately time such an event. Markets right now is attracting in a different way but sometimes the penalty in terms of likely opportunity cost is just too great to justify being out of the markets.

However, nothing in the investment world is a good idea or a bad idea per se. It all depends on when it’s being done, and at what price and terms, and whether the person doing it has enough skill to take advantage of the mistakes of others, or so little skill that he or she is the one committing the mistakes.

Not necessarily, if the music’s playing, you gotta dance. You can just sit and enjoy other’s dancing.