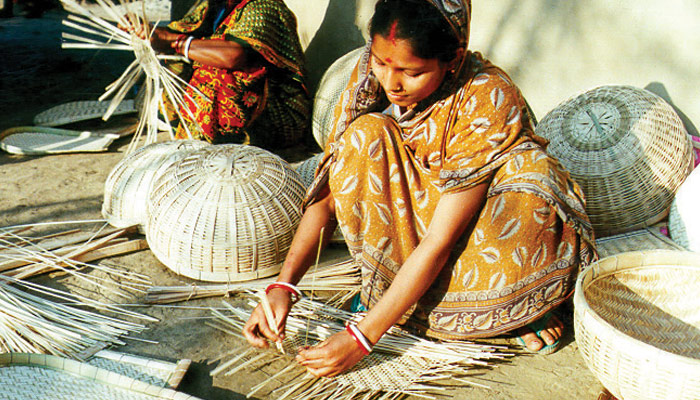 Unlike mainstream banking which is increasingly fraught with instances of fraud, the default in the microfinance industry is largely characterised by borrower distress which needs careful evaluation and requires policy driven solutions.

A study based on 10-year secondary data from the Indian Microfinance industry, undertaken by Prof. K.S. Ranjani and Prof. Poonam Singh, shows that expenditure on training helps to improve borrower repayment capability.

Lakshmi Bai, a widow, had two children aged 14 and 12. Both went to government school and even with a full fee waiver, she could not make ends meet. She heard of a company that gave small loans and went there to enquire whether she would be eligible for a loan. She was told that she could get training in basket weaving and at the end of the training, a small loan to buy raw materials. Today, she makes `6,000/- per month weaving and selling baskets. LaxmiBai, like countless other women is a borrower from a microfinance institution. Microfinance in India is a growing sector with a total gross loan portfolio of `106,916 crore as of March 2018.

Microfinance business in India is perceived to have tough collection practices resulting in almost negligible loan default. While the commercial banking sector accounts for a non-performing asset ratio of 11% as of March 2018 and a predicted bad loan ratio of 12.2%, the NPA in the microfinance sector is pegged at 4% of its total exposure. Both in terms of percentage as well as in terms of absolute, this does not raise as much an alarm as the mainstream banking industry figures do. Yet, this signifies a directional shift in the microfinance industry which was considered, all along, to be characterized by absence of bad debts. While still in comparison, what strikes as significant is the fact that unlike mainstream banking which is increasingly fraught with instances of fraud, the default in the microfinance industry is largely characterised by borrower distress. Fraud can be addressed through tighter regulation and punitive legislation, but distress needs more careful evaluation and requires policy driven solutions.

Supply of small credit has traditionally been policy driven, evidenced by the thrust that MUDRA has received. Since the scheme was launched in 2015, the aggregate lending till date stands at `4.6 lakh crore, the number of borrowers is around 10.36 crore of which more than 70 percent borrowers have been women. In fact, policy support for small credit dates back to IRDP (Integrated Rural Development Programme) initiated in the early 70’s. The demand for credit, however, remains unfulfilled and the increasing aspiration levels witnessed in the nation is bound to leave people more and more credit hungry.

If the focus of policy is to match the supply with demand, then the obvious solution would be to increase the quantum of lending. But, would that suffice? How do we know that this may not go the mainstream banking way with a stink of bad loans, not likely to be recovered ever, given the absence of collateral in the small loan segment? Mere lending is not enough, without increasing the capability of the borrower to repay. Steps are required to ensure that the borrower distress in the small loan segment is averted before we create the monster.

We need policy for capacity building which could be positive as well as sustaining. Our study based on 10-year secondary data from the Indian Microfinance industry shows that expenditure on training helps to improve borrower repayment capability, enables borrowers to come back for more loans and also improves the performance parameters of the firms measured by firm profitability and outreach. The study goes on to further establish, surprisingly enough, that borrowers do not necessarily respond positively to interest rate incentives. Moreover, we find that firms are unable to sustain profitability with increase in outreach through their maturity phase.

One important implication of the study is: “to achieve sustainable institutional performance, institutions may need to look beyond just efficiency measures”. This clearly indicates the critical role played by capacity building through adequate training of the borrowers. It becomes even more significant since the borrowers in the MFIs tend to be poor and mostly illiterate. Adequate training thus enables them to better utilize the funds, understand the risk associated with the businesses where they invest the funds and improve the possibility of repayment.

What does this entail? A clear policy direction to link training with the lending programs. Training borrowers who are poor and illiterate is a specialised task. However, the silver lining is that there is a well-entrenched training infrastructure in the form of institutions such as RSETI (Rural Self Employment Training Institute) and ASETI (Ambedkar Self Employment Training Institute), usually under the aegis of nationalised banks. These institutions are equipped to undertake various training initiatives for borrowers since they have rural presence as well as training infrastructure in place.

The bulk of microfinance borrowers happen to be women. Like Laxmi Bai, several of them are not trained to engage in small trade or employment since women have traditionally had more restricted access to schooling and education than their male counterparts. Many women get into a job, vocation or trade due to force of circumstances rather than by design. Hence the role of training, especially for women, is a serious enough issue to be addressed through a policy framework. While studies show that women are more sensitive to social shame that is a natural consequence of loan default, they also prefer to spend the next available penny on family priorities than personal priorities. A combination of these factors not only make them better borrowers, but with the right incentives, also better repayers.

In a broader context, women are more “benevolent and universally concerned but less power oriented and found to be loath to making decisions that they did not fully understand. Diligent female borrowers who had the need for credit to support their families as well as micro business, had an important role to play in restoring faith and confidence on the industry among clients. In the interest of the small credit eco system, there is no better time than now to put in place, women driven training and lending system that turns around the financial system of the country, which lies deep inside the ruins of mountains of bad debt. It is time to power growth from bottom up pioneered by the women of the country!!

(The authors are Assistant Professor, NITIE)