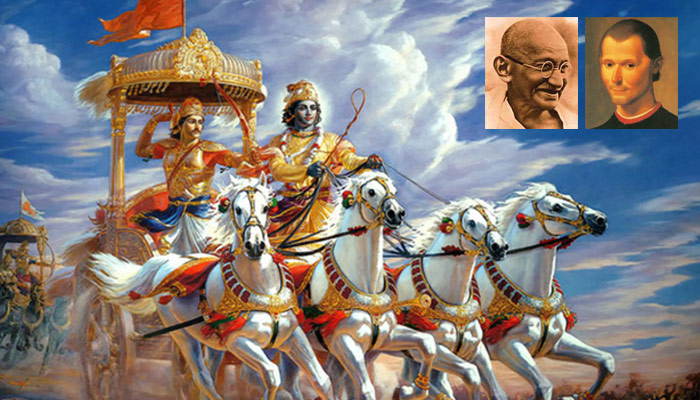 Between a Machiavelli and a Mahatma, Modi must choose Mahabharata to seek and secure India’s commanding position in the New World Order

Since the days of Chanakya the great (375-283 BCE), Indian nationalism had been consistently dying till date. Barring a singularly meaningful attempt by the naval forces in 1946 inspired by Netaji Subhas Chandra Bose that got aborted, and number of localised struggles, in no way small; as Kaliyuga progresses, the soul energy binding a nation and her citizens is diminishing.

India’s psyche is unable to resolve the conflict between Machiavelli’s philosophy that “Ends justify the means” and MK Gandhi’s sermon that “Means are as important as the end.” Rather than a higher goal, adopting fairness of the means in any contest became a goal in itself. For the last century, this confused approach has served us no long term good as it presupposes people to constantly evaluate the fairness of the means and the outcome – whatever it may be.

Millions of lives and ideas have wasted perpetually as the philosophy of continuous reflection on both the goal and the processes, sometimes to the point of self-doubt, has impaired reasoned decision making and thus denying us reach our potential. Or, many and most of the times, an unexpected undesirable outcome surfaces like a “cobra effect” which again puts the people and community back to where they were – the beginning of a tussle and a new struggle. Inability to resolve this conflict, or obsessively seeking balance in a permanently conflicting world, blurs your vision, and combined with ineffectual effort leads to accomplish what’s good and fair only for today. Tomorrow, we start it all over again full of promises but our feet tied to rocks.

This mindset doesn’t allow one to plan strategic goals that are very long term in nature because one remains extremely obsessed with constant evaluation of the fairness of the means employed currently whereas long term evolution goals may require undertaking efforts that might appear unreasonable today.

This mental approach encourages very weak governance style and allows long term goals to remain at the mercy of manipulated short term attitudinal swings among people. Long term strategic goals are routinely sacrificed for the fairness of the outcome of a short term conflict by a regime fixated only on winning or losing short term battles.

Therefore, being focussed only on the outcome of short term actions, you miss out on the big picture. As the modern man makes progress and the world around him transforms every generation or so, our leaders must be able to see through this dark tunnel of confusion and put in action plan for the long term sustenance of the society, its culture and wellbeing of community members.

Ancient Indian scripture – The Mahabharata – is a graphic account of real-life situations, their inherent choices and is undeniably the most vivid distillation of thoughts on statecraft that could be practical in any era. Throughout, and its illustrious section – Bhagavad Gita – it teaches us the importance of making the right choices in dynamically difficult and evolving situations.

Nothing is as dangerous to us now as leadership hankering for the “status-quo” which could be an option to deal with a short term problem but can never be a long term goal in itself. India was deprived on a range of economic, social and geopolitical questions as the western paradigm adopted a Goldilocks approach towards India because of her non-alignment policy in the Cold War. Much of this now has substantially changed. Career diplomat and India’s foreign minister S. Jaishankar in his book The India Way writes “the US specifically and the West as a whole has lost its edge, that is due to its miscalculations on political Islam and China respectively.” Besides securing interests of her own people, India must also assume responsibility to speak for a larger developing world constituency.

The 21st Century India must possess and demonstrate determination to implement key long term policies without being discouraged by the collateral consequences in the short term. As Krsna steered re-establishment of Pandava’s rule over Indraprastha, Modi must choose a line from the Mahabharata since other philosophies might have become irrelevant in today’s multipolar world.