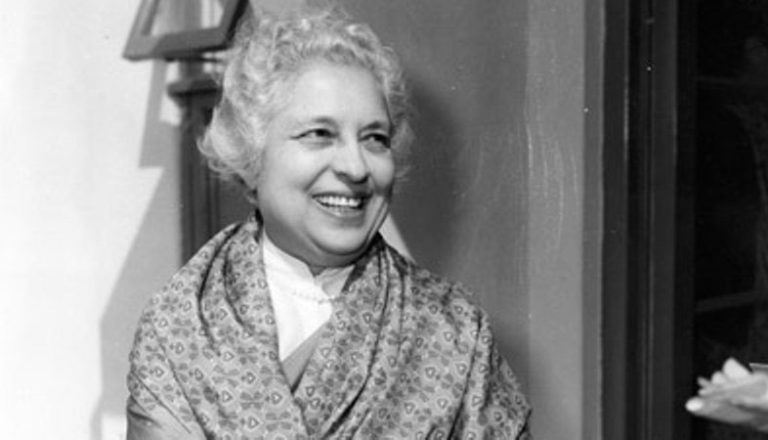 No, I was not reading it the first time. That was in 1982 during the good old days in Madras (the more famous and wonderful name of Chennai). Though I don’t consider Vijayalakshmi Pandit a great writer or a great politician and have no doubt she occupied all those prestigious positions just because she happened to be Jawaharlal Nehru’s sister. But I have read her book ‘The Scope of Happiness: A Personal Memoir’ several times. I could not afford to buy a copy because those days watching a Shivaji Ganeshan and KR Vijaya starrer movie was a better option so I noted down a lot from the borrowed book in my diary.

Born in Allahabad on 18 August 1900, Vijaya Lakshmi Pandit was the eldest daughter of Motilal Nehru and Swarup Rani and was eleven years younger than her brother, Jawaharlal Nehru. Her father kept a European governess named Miss Hooper. Her family home Anand Bhavan was the venue of the meetings for the Congress leaders. She changed her name to Vijay Lakshmi Pandit after her marriage to barrister Ranjit Sitaram Pandit. Mrs. Pandit too was imprisoned by the British on several occasions.

She had a long career in politics and in 1937, became minister of local self-government and public health, thus becoming the first Indian woman ever to become a cabinet minister. Immediately after, Jawaharlal Nehru wrote her a congratulatory letter that shows the kind of relation the brother and sister had and their sense of humour.

I quote: “Remember the Chinese philosopher with four sons. The first was clever and trained to be a poet. The second was brilliant and learned the arts. The third went into the army. The fourth was the despair of his famous father who consulted many friends. Their advice was that the boy’s intellect was limited, so he might do well as a cabinet minister.”

Nehru’s sarcastic comment is, although written in a fun way, still correct as the history of independent India presents ample proof.

In 1946, she attended the United Nations General Assembly as leader of the Indian delegation. Later she became the first ambassador to the Soviet Union and held the same position in Ireland, United States and Mexico. She made history in 1953, when she became the first woman and the first Asian to be elected president of the U.N. General Assembly. She also served as governor of Maharashtra. She died in 1990. I heard her the first time in 1977 when she joined the Congress for Democracy, a part of the Janata Party.

Those were the days of Jayaprakash Narayan, the man who single handedly was instrumental in freeing India from the clutches of one of the most powerful self-centered politician Indira Gandhi. Only people who suffered during those Emergency days can feel that freedom. Despite being witness to a muted country, I strongly feel politically those were fascinating times.

I will not go into details rather I would love to share a page from my diary. Nehru told a story to Mrs. Pandit in her young age. It concerned a very poor, but good and God fearing man living in a one room shack whose highest ambition was to build a house in which he and his family might live in comfort. In his village there lived a holy man and each morning the poor man went to perform small acts of services in the hope of getting a reward. But the seasons passed and nothing happened. Grown desperate, one day the villager begged the Sadhu to intercede with God so that ambition of having a bigger house might be realized.

Now I quote the interesting conversation the two men had: “The holy man asked the villager how large his family was. ‘We are seven, came the reply, ‘myself, my wife and five children, and there are also six goats and a cow.’”

“Where do the animals live?” asked the Sadhu.

“They are tied out in the open.”

The Sadhu thought for a while and finally said: “Tonight when you go home, take all your animals into the room with your wife and children and keep them there.”

The man was bewildered, but, believing in the holy man, he did as he was told. Two days later he went to the Sadhu and said: “I cannot tell you how we suffered by following your advice. The animals took up all the space and my wife and children could not sleep. Furthermore, the smell is so bad that we shall surely die if we are confined in this way.”

The Sadhu advised that the cow should, that night, be tied up outside as before.

Two days passed and the poor man came again. “We are still very unhappy, he complained. The goats stink and make a mess and take up space.”

“Put out the goats too.” said the Sadhu.

The animals were returned to their old place.

When the man next visited the Sadhu he said, “You are indeed a wise man. My room is clean and bright and I am content.”

I can’t resist myself to quote another story. Mrs. Pandit’s mother was very anxious to go on pilgrimage, but in her father’s view it was a waste of time. He kept teasing her by saying that instead of that pilgrimage should lead to the west – to Europe, to America, in search of the key to progress so that we can open the door to a fuller, richer life for ourselves. Then, seeing her look unhappy, he would say. “I do not have to go on pilgrimage because my relations with the almighty are cordial. He understands me. I have a feeling that on my last journey He will not expect me to struggle unaided across the Vaitarni, but will probably provide a motor launch with a high powered Rolls Royce engine to take me over.” By this time mother’s distress would be so apparent that he would hasten to add, “If this should happen, I know it will be due to your good life and intercession. So, of course, you must go to pilgrimages.”

Mrs. Pandit being a sister of the Prime Minister and having held several important positions at the very nascent stage of the Republic has many things to share, to disclose and bust myths. I don’t think she has succeeded, but it seems it was not her effort to clear the questions looming before the reader when he or she picks up the book to read. She wrote the book effortlessly and we must accept it in the same spirit. But, in spite of that she has opened some windows which are fascinating to my generation.

We also get to see the cold and icy relationship Indira Gandhi had with her close relatives. When England pressed India to send Mrs Pandit as High Commissioner and she was all ready to go Indira called her and in a very polite and loving way got up from her chair, encircled her head in her hands and told “Well Puphi, I don’t really trust you.”

Pandit answered as her resignation from Loksabha.

Going back and revisiting life is not an easy task. One needs a clear mind and the skill to swim across one’s memories. One needs to become an octopus while writing so that readers could also swim with the writer at his speed. Mrs. Pandit has certainly succeeded.