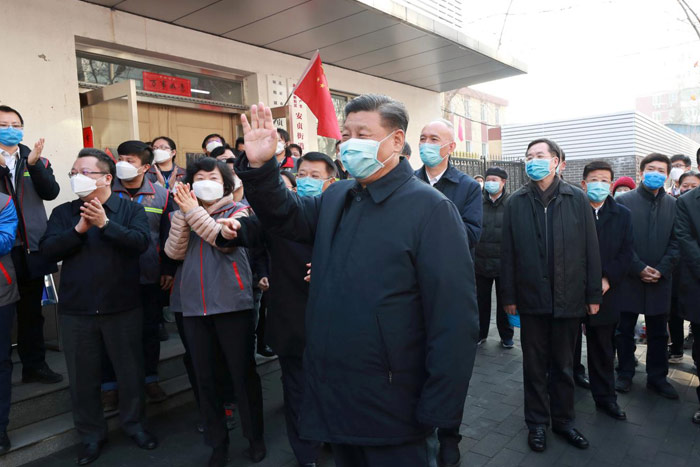 It is akin to War Crimes. The country must be brought before the International Court of Justice

Coronavirus pandemic is, beyond a reasonable doubt, an outcome of criminal negligence on the part of Chinese authorities. The war-like devastation caused by this Chinese Virus calls for the complicity of Chinese leadership to be dealt with like war crimes. It is nothing but a ‘classic case of war’; the mischief is akin to a war crime. The world should not believe China about China’s Coronavirus success.

The country is still hiding facts but underreporting

of its pandemic totals is unsurprising. We all know that official statistics from the country are often lies as Communist leadership has taken a more authoritarian turn in recent years under Mr. Xi Jinping, President of the People’s Republic of China, Chairman of the Central Military Commission and the general secretary of the Communist Party of China. He enjoys tremendous power and authority, answerable to none as the country has no independent or democratic institution to question him. This crisis has also raised doubts about the vigilance and effectiveness of the World Health Organization.

Numbers will never tell a lie

See the numbers – China has reported about six coronavirus cases per 100,000 people, well below the rates in Italy, Spain, the United States and elsewhere. Much below.

Way back on December 8, 2019, a Chinese doctor in a Wuhan hospital confirmed the first case to be COVID-19 infection but he was ordered not to disclose any information about the disease to the public. Why? If the administration would have been unaware about the deadly virus it would have swiftly acted to contain it and shared the information.

December passed, began a new year, on January 15, 2020, the first case of Coronavirus was detected in Japan and during the same time videos of people dropping dead on Wuhan streets, went viral. Doctors in Japan raised the possibility of human-to-human transmission.

Now it was hard for the Chinese administration to hide facts and after another week on January 23, it admitted to the human-to-human transmission of the virus. Just imagine if the world knew that the newfound China Virus can spread like this we would have not lost so many innocent people in Italy, Spain, UK, USA and many other parts of the world.

The Chinese government locked down Wuhan the same day on Jan 23, halting all public transportation going in and out of the city and again within 8 hours passed another order suspending group travel within China. On the one hand, China did take such precautionary measures for its people yet it did not disclose the nature, and till that point of time its recorded observations regarding the virus with the world community. On the other side, China did not suspend group travel to foreign countries. That order was passed after four days. So it allowed people to go out of the country without telling them that they are taking a Chinese Gift with them.

We cannot call it a blunder, it was mischief. Maybe a calculated move.

Trying to show an upmanship, in March 2020, the Chinese government started pushing xenophobic propaganda implying American soldiers brought COVID-19 to Wuhan, which was endorsed by Ministry of Foreign Affairs spokesman who tweeted “It might be US army who brought the epidemic to Wuhan”.

According to media speculation, at least 175,000 people left China on 1 January 2020 and as the virus was spreading fast the departures from Wuhan too accelerated. It continued till January 27. A simple estimate reveals that within this period more than 50 lakhs people left China. Yes, it was the period before travel was restricted. Thus travellers from Wuhan took unknowingly the Chinese virus to more than 27 countries. They became a courier of the deadly virus. Many went home and now dead taking up with them many of their family members.

What was their fault?

According to reports published in the New York Times CIA has been warning the White House since at least early February that China has vastly understated its coronavirus infections and that its count could not be relied upon. Midlevel bureaucrats in the city of Wuhan, where the virus originated, and elsewhere in China have been lying about infection rates, testing and death counts, fearful that if they report numbers that are too high they will be punished, lose their position or worse.

Why the country should be held responsible –

The world community has understood and China is being ridiculed, though not openly, even when their leaders are showing no such sign and still talking to the supremo of China. It seems they are just buying time because right now they need masks and medical equipment from China which is more important. US President was too smart to answer the question when asked about intelligence reports that China had misreported the virus’s damage. He said, “the numbers seem to be a little bit on the light side, and I’m being nice when I say that, relative to what we witnessed and what was reported.”

He knows very well – this is time to be nice.

Unrestricted Warfare has been China’s Strategy

The whole world is aware that China, for many years, has been focusing on biological warfare and integration of biotechnology with information technology in their military doctrine. Qiao Liang and Wang Xiangsui (in their book titled ‘Unrestricted Warfare’; Read the review elsewhere in this issue) of China’s People’s Liberation Army who, two decades ago had announced that the first rule of unrestricted warfare is that there are no rules and nothing is forbidden.

The Other Side Story

Friends of China are often quoting a report titled as “Characteristics of and Important Lessons From the Coronavirus Disease 2019 (COVID-19) Outbreak in China” published in the Journal of the American Medical Association on Feb 24 and I quote here: The Chinese government has improved its epidemic response capacity since the 2002–03 SARS outbreak, when 88 days passed from the first case of SARS emerging to China notifying WHO of the epidemic, at which point there were 300 cases and five deaths. With COVID-19, by contrast, there were only 23 days between the onset of symptoms in the first case and China’s warning to WHO on December 31, 2019, when there had been just 27 cases and no deaths.

Friends of the Communist regime have another argument. They are trying to convince the world that it is very hard to hide an epidemic. Surprisingly they forget China’s political structure that the country has no independent media to report the happenings. The world media, even those who have stationed their reporters in China, also have to depend on the official press handouts. The friends have many other points and their main argument is that hiding such facts are impossible because having two sets of statistics, one for the administration and another for the world needs a top-class security arrangement which could not be done without the active support of millions of doctors and nurses and such secret collusion is impossible to have.

The above-mentioned facts are out and available in the public domain. Nothing is secret. The number of people who believe in the conspiracy theories of China is increasing around the world every day. Many have started cursing China. But merely cursing would not be sufficient. An Australian MP George Christensen is the latest to join the list. He said China has “to pay reparations for the global spread of coronavirus” and he has also urged investigations into reports that COVID-19 originated in a Wuhan laboratory. There was also a report that the South China University of Technology has published a report in February saying the virus may have originated in a research facility less than 300 metres from the Huanan Seafood Wholesale Market in Wuhan. Yes, you read it right! The South China University of Technology.

We know the country cannot hide for long and the truth will start tumbling of its own. China has already started taking advantage of the weakened dispositions of many countries. More than 800 factories are producing masks to be exported. Well, that’s good but why it stopped the factories around the world?

Even in the absence of solid proofs of waging a chemical war the world should join in condemning China. The administration should be charged for concealing information from its people and the rest of the world. Some political analysts have also suggested that since in the UN it would not be possible to impose sanctions as that can be easily vetoed by China, the General Assembly should come together to take appropriate action and ask the world at large to isolate China, even if the term may be shorter maybe a year or two.

With this act China has lost its moral authority, it has lost its credibility; it has lost the chance to come at par with the USA, which is far more liberal, open, and the first option of any migrant or asylum seeker irrespective of Mr Donald Trump’s “America First” policy.

We strongly advocate that China must be held responsible for the ‘engineered coronavirus’ which has killed more than 50,000 people worldwide. It doesn’t matter whether it was negligence on the part of its scientists or whether it was something done deliberately. The country has done an inexcusable, unpardonable, unjustifiable, indefensible and reprehensible act of offence and it must be punished on the political front, economic front, socially and culturally too. That would be the best tribute to all those dead.