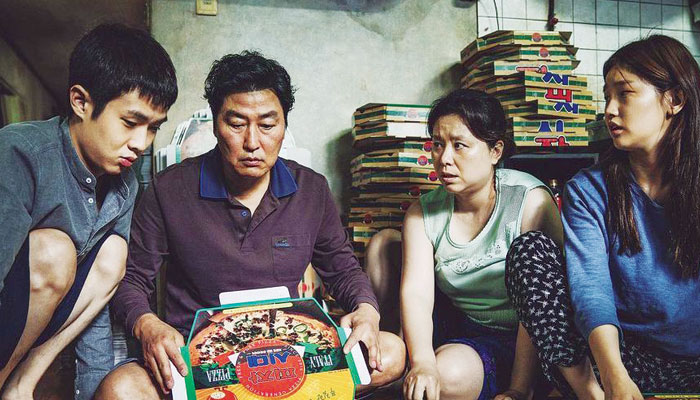 The Oscars were never considered an international film festival because they were very local. The jury so far has been making conservative choices when selecting Oscar awards – white filmmakers focusing on stories about white people. But at last this year Oscars become truly representative of world cinema (although an ulterior motive behind this cannot be ruled out as the Miss World selectors had suddenly turned brown-skin lovers two decade back to capture Asia’s largest middle-class population).

Bong Joon Ho’s “Parasite” a genre-defying film about class warfare, received Academy Awards for best picture and best director. This is the first ever foreign language film to win the top Academy Award. “Parasite” won the Palme d’Or at the Cannes Film Festival in last May and the Golden Globe for best foreign film last month. The film documents how the deepening rich-poor gap in advanced capitalist societies breeds blind hatred and crimes.

The film has a universal appeal. That was the reason why as soon as “Parasite” hit the screens last May, it resonated with South Koreans. The director has used a masterful mix of comedy, satire and violence to describe one of the country’s biggest social and political issues: widening income inequality. The story has given space to the despair income inequality has generated which makes the film acceptable in any language. In fact audience doesn’t need words to describe the scene. People around the world could relate to the polarization it describes. The film touches most of the troubles a poor family has to face living anywhere in the world. Even it depicts exorbitant housing prices the poor face in the country’s congested capital city Seoul – a story prevalent in most of the world’s leading cities. In the movie, a poor family living in a stifling semi-basement home uses subterfuge to get various jobs from – and feed off – a rich family in Seoul. In a sense the family is living like parasite. Again there are scores of families living in most of the world’s leading cities.Parasite proves that a story that examines the struggles of ordinary South Koreans could strike a chord around the world because of the inequalities that afflict many societies.

There is a deepening fatalism among the have-nots over their inability to climb the social ladder which manifests itself in rising crime. There was a current simmering in the country which fueled the response.

Around the same time the gap between haves and have-nots was discussed at all the platforms in Seoul. It was a hot topic because it involved a minister – not just any minister, but the justice minister, a man who was at a very high pedestal before the news broke out. He was also presidential secretary and a favorite to succeed Mr. Moon. The scandal was known as Gold Spoon and Dirt Spoon. The minister was accused of using his influence to help his children get into prestigious colleges. The public uproar was so much high-pitched that the minister Cho Kuk had to resign. Before becoming minister Cho was paraded by the media as a leading advocate of equal opportunities.

In the centre of the crisis was a medical research paper which was published in the Korean Journal of Pathology in 2009, written by a team of university researchers and its lead author was Cho Min, the daughter of Cho Kuk. This paper subsequently helped Cho Min to gain admission to the prestigious Korea University in Seoul in 2010. A newspaper revealed that the daughter’s achievement had come after only a two-week internship with the team while she was still a high school student.

Like in India, “gold spoon” children of the elite always glide to get whatever they wish leaving their “dirt spoon” peers to struggle. Like in India, in South Korea also, salaries and job titles are directly related to the university one has attended. So the powerful and mighty families often resort to dubious tactics to get their children into the best universities.

The film reminds that the powers that may be should not forget, Millennial, anywhere in the world, consider fairness the most important value. Parasite has attracted huge audiences by fictionalizing the divide between the gold-spoon children and their dirt-spoon peers.