Rajya Sabha is a relic of the past 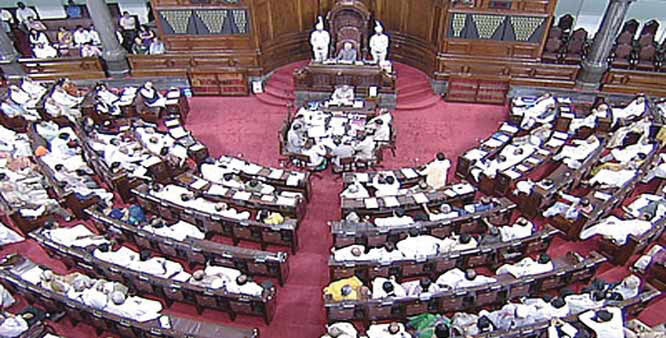 Probably the first time the loud mouthed Samajwadi Party leader and Member of Parliament Naresh Agarwal raised an important issue in the Rajya Sabha when he attacked cricketer Sachin Tendulkar and actor Rekha, asking them to resign if they are not interested in the Parliament. He questioned the Chair that why shouldn’t their membership be canceled from the House. Records show that while the national average attendance of an MP is 78%, Sachin Tendulkar’s average as an MP is 7% and Rekha’s average stands at 5%. It would be conducive to compare it to the average attendance of another ten nominations. Sambhaji Raje with 100%, tops the list, whereas Subramanian Swamy is close second with 92%. All other nominations have a record attendance above 60%.

Prior to Sachin Tendulkar and Rekha, several other nominated members have recorded poor attendance in Parliament sessions. Lata Mangeshkar was a Rajya Sabha MP from November 1999 to 2005, and she attended merely six out of over 170 meetings. She used her power as an MP only to express discontent towards the possibility of a flyover being built opposite her house on Peddar Road, Mumbai. When asked about her lack of interest in attending Parliament sittings, she claimed that she had in fact pleaded with those who urged her into the Rajya Sabha to let her off; but then why did she accept the offer.

Rajya Sabha has equal powers to the Lok Sabha except for money bills, where it has no jurisdiction. It is a 250-member body, 238 are elected by an electoral college made up of state legislators. As per the Constitution Of India’s Fourth Schedule – Articles 4 (1) and 80 (2), the President nominates 12 achievers to be a part of the Rajya Sabha for a term of six years for their outstanding contribution to art, literature, science and social services. But the nominations have always attracted controversy; the criteria are too vague. What has been observed over the last 70 years is a simple one liner funda – that to qualify one has to be sympathetic towards the party in power, have to be in their good books.

But this is one apect only to start the arguments against the very usefulness of Rajya Sabha.

The Upper House (Council of State, as it was called then) traces its direct history to the first bicameral legislature introduced in British India in 1919 as a consequence of the Montagu-Chelmsford reforms. It was made up of 60 members, 34 of whom were Indian, elected by an elite group and the direct election was conducted under a framework of communal franchise. Parliament records state that bicameral question was raised in the Constituent Assembly by Professor Shibban Lal Saksena who said: “In this motion, we have been asked to vote for two Houses, the Lower House and the Upper House. I wish to point out that our experience has been that the Upper House acts as a clog in the wheel of progress. I think that everywhere in the world the experience about Upper Houses has been the same. It has always acted as a sort of hindrance to quick progress.”

When Sarvepalli Radhakrishnan became the first chairman of the Rajya Sabha, he said, “There is a general impression that this House cannot make or unmake governments and, therefore, it is a superfluous body. But there are functions, which a revising chamber can fulfil fruitfully. Parliament is not only a legislative but a deliberative body. So far as its deliberative functions are concerned, it will be open to us to make very valuable contributions, and it will depend on our work, whether we justify this two chamber system, which is now an integral part of our Constitution.”

Although it has always been considered as a European caste system with the clergy, nobility and commoners representing the three estates, supporters have been bouncing that the role of the Upper House is to be a deliberative body that would balance what James Madison, the author of the Federalist Papers, called “fickleness and passion” of an elected Lower House.

Increasingly, in 21st century democratic India, the Upper House is more symbolic, cosmetic and has lost its relevance. Times have changed. Old rules are no longer valid. For a transparent governance, India needs to abolish certain institutions, reform others and create new ones. Rajya Sabha is one such frail institution that is no more required to preserve federal nature, the very idea with which it was created.

The Constitution-makers conceptualized the Council of States as a representative body of States in the federal framework of the Indian Constitution. Hence the Representation of People Act, 1951 stipulated that a person would not be qualified to be chosen as a representative of any State or Union Territory in the Rajya Sabha unless he is an elector for a parliamentary constituency in that State or Territory. However, many members of the Rajya Sabha are being elected from States of which they were not residents or have had little ethnic or linguistic affiliation.

The domicile issue was raised first time in the 1990s, when T.N. Seshan, the then Chief Election Commissioner, sought to disqualify Dr Manmohan Singh, the then Finance Minister on the ground that he did not ordinarily reside in Assam and therefore did not fulfil the legal qualification for the membership of the House. He did not succeed. However, finally in August 2003, the domicile requirement was done away with through an amendment of section 3 of the Act.

This amendment was challenged in the Supreme Court through a PIL by Kuldip Nayar and Indrajit Singh by saying that this amendment violated the basic structure of the Constitution since such a requirement was the basic principle behind the Council of States and that the Parliament in 1951 prescribed the domiciliary qualification in the electoral law. They pleaded that anyone who is not a resident of the State should not be eligible to contest the elections to the Rajya Sabha. However, a five-judge Bench passed a unanimous judgment in favour of the amendment.

Rajya Sabha is generally expected to give a well thought and studied discussion on Bills in the house. Bills passed in haste in the Lower house needs to be given proper thought upon. This assumption that Rajya Sabha will enhance the quality of deliberation is being under scanner. One argument is that it provides continuity to the Parliament as unlike Lok Sabha, Rajya Sabha cannot be dissolved. But why we need this continuity. The president is enough and till the new government is formed, the outgoing prime minister is effective constitutionally. Secondly, the argument of Rajya Sabha being a representative of the state that maintains federal balance is also getting questioned after the rise of regional parties in the Lok Sabha. It makes this function of Rajya Sabha redundant.

Rajya Sabha has been seen as the backdoor entry for the politicians who have lost the general elections. It has become a haven for crony capitalists, compromised journalists and party fundraisers. The legal protection parliamentary privilege affords the members making them behave like Moguls – too much privilege, too little accountability. Their increasingly irresponsible behaviour has lowered the image of the Upper House and disrupted legislative business. Three prime ministers have been elected to the Rajya Sabha without having to face the electorate. It is clearly an anti-democratic way.

Several times the Rajya Sabha had been adjourned for lack of quorum. Beside this, Rajya Sabha is being manipulated to curtail and delay the various laws made by the Lok Sabha just for political gains, hence proving to be a major hindrance in the speedy legislative process. The financial burden of its maintenance is another point of concern.

A Lok Sabha that has representatives from several regional parties more than adequately represents a federal country and there is no reason to have another House. But, the problem is, it is virtually impossible to abolish the Rajya Sabha without adopting a new Indian Constitution. Montagu- Chelmsford established the structure in 1919 and since then changes have been scant. Now a century old institution has lost its purpose. Till it is not abolished completely one useful reform step would be to have members of the Rajya Sabha be directly elected by the citizens of a state. Secondly, it should not be allowed to stop legislation of any kind, not reject it.

Reforms should begin with the Lok Sabha and not with Rajyas Sabha which need to be abolished. In a country with a population of 125 crore, the Lok Sabha’s 545 MPs (including two nominated MPs) are grossly inadequate. The ratio works out to one MP for roughly 23 lakh citizens. It was justified when the population was just over 38 crore in the early 50s, – a much better average of one MP for around seven lakh citizens. Once Britain, with a population (6.5 crore) has 650 MPs in the House of Commons – an average of one MP for one lakh citizens, why not India, where constituencies run into tens of lakhs. Several large constituencies need to be broken into smaller bits.