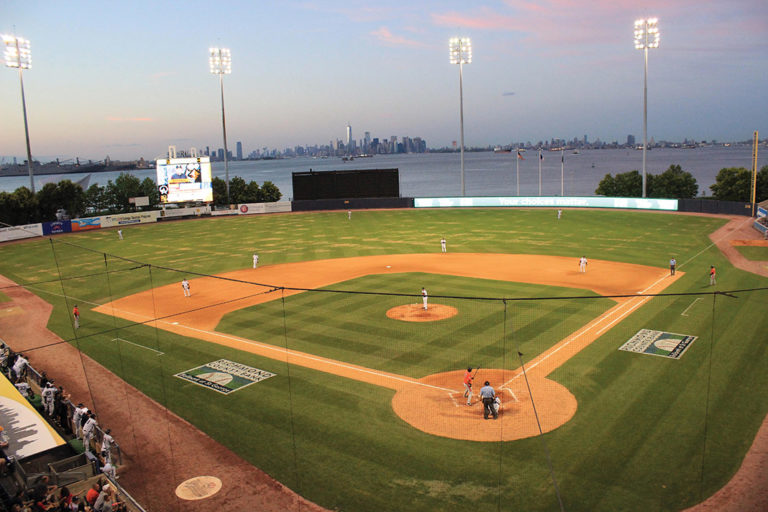 The ballpark of Yankees Staten Island, New York City Harbor, and in the distance, the New York City Skyline. A night game being played in the Richmond County Bank Ballpark at St.George.

Summer in New York, a good time for a boat trip and watching a baseball game. Late afternoon on a Saturday this past July, I emerge from the subway station at Bowling Green in Lower Manhattan and walk to the Staten Island Ferry Terminal. I am on my way to watch two Class A league teams, the Yankees Staten Island, a team of young players affiliated with the New York Yankees, play the Brooklyn Cyclones, affiliated with the New York Mets. The Cyclones derive their name from the death-defying roller coaster ride at Coney Island by the Atlantic Ocean. (Yes, New York City is a city of islands and the sea, not unlike Bombay.)

As the ferry proceeds through New York Harbor, where the sea – the Atlantic – and river – the Hudson – meet, I recall my youthful encounters with the game of baseball. I played on the St. Bernard’s School Second Team in the 8th grade. The Second Team was made up of boys who failed to make the First Team. We were the flotsam and jetsam of the athletic department. I was never any good, lacking as I do, the requisite hand and eye coordination, so essential to playing baseball and, I assume, cricket. My main concern was to avoid being hit by a ball rather than hitting the ball. A baseball is a hard, solid object. Traveling at high speeds, it can inflict bodily harm. As a result, my batting average rarely surpassed the daily temperature.

Our team played on Randall’s Island in the East River beneath the Triborough Bridge. I played in center field. Soft grass underfoot, a view of the city’s downtown skyline, tugs on the river battling strong tidal waters, airplanes positioning for an approach to LaGuardia, bright colored butterflies darting about. In such a setting, I had no cares. I could reflect on the joys of life and dream of great deeds to be undertaken by me in the future. Day-to-day hassles–Latin / grammar / homework — melted away.

Baseball is a complex game. So complex, the rule book is many inches thick. To simplify things, let me turn to the words of the co-founder of St. Bernard’s, Francis H. Tabor, a gentleman from England, who wrote the school’s songs, among them, the “Baseball Song.” He succinctly describes the action on the baseball field, almost making it sound like cricket.

A pitch, a crack, the ball flies back,
A swift dispatch, a clever catch;
Quicken your pace and race for base;
You’re safe! You’re out!

The big game of the baseball season for the Second Team was against Greenwich Academy. I was in center field as usual, counting cars on the Triborough Bridge and wondering when the Boston-bound train would cross the magnificent Hell Gate Bridge. A glorious spring day. I nibbled on fresh shoots of grass. In the last inning, with my team one run ahead, I heard an ominous sound, the sharp crack of bat connecting to ball, just as Mr. Tabor had written. Seeing the ball arch skyward in the direction of center field, my situation became all too apparent. Catch the ball, be a hero; drop the ball, be disgraced, with responsibility for the team’s loss.

With the batter rounding first base, the ball reached its zenith and began a downward descent. Teammates rushed to center  field to help me out. Down, down came the ball. I could do nothing to avoid it. As a self-protective measure, I placed my open glove in front of my face. Plop into the glove went the ball. Having plopped in, it decided to pop out, but before the ball hit the ground, I caught it with my bare hand. My teammates were delirious with joy.

Details of this event were recounted to me decades later by the captain of the Second Team, now a Wall Street baron. He tells me that he still has nightmares about my catch. I inform him that I have never lost a wink of sleep over the game of baseball.

But to return to the present. The ferry arrives at Staten Island. I disembark and walk to the ballpark. There is a long line by the box office. While in line, I hear a shaky rendition of the “Star-Spangled Banner,” not an easy anthem to sing. The game is about to start. I am charmed by the young man at the box office. I ask him where I should sit. “You want to be behind home plate where you can see the pitching, hitting and base running. And there you will have a fine view of the Manhattan skyline.” “Perfect,” I respond. Ticket price: $18. I call his attention to my advanced years. Ticket price reduced to $10. Ten dollars to watch a doubleheader played by talented young players from a good seat with a view of the city skyline. The best deal in an expensive city. And the ferry is free!

On entering the ballpark, a security guard checks my bag. Next to him, a sign reads, “No outside food or drink.” He sees my peanut butter sandwich and cherries, but waves me in. I find Section 9 behind home plate. Families and teachers occupy the section. Between nibbles, the young boy sitting next to me places his cotton candy of spun sugar against my arm. Sticky, but how can I complain, everyone is being so nice.

I learn from my neighbors that it is the dream of every player on the field to move up from the Class A league to a major league team. A sign in the ballpark captures this well:

Geographically, a mere 15 miles from Staten Island to the Bronx, the home of the New York Yankees, but a long and difficult journey for those few who make it. (In the stands are scouts for professional teams on the lookout for talent.)

Within New York City’s  304.8 square miles can be found sophisticated Manhattan and, as I am experiencing on Staten Island, small town America. Thus, between game innings, the local crowd is informed by the ballpark announcer of the students present at the game who just graduated from Sacred Heart Academy and the names of birthday and anniversary celebrants with us in the stands. Cheers for all. There are three legged and other races. Fans dance to rock and roll and disco music on the roof tops of player dugouts while the rest of us sway to the music. We all rise to sing, “America the Beautiful” — so much more singable than the National Anthem — and “Take Me Out to the Ball Game.” (My favorite line, “Buy me some peanuts and crackerjacks….”)

I ask my neighbors about the finer points of baseball. What is a “balk”? An infield fly? They explain. I ask about the music being played, since I am mostly into opera. At times I feel like someone from another planet, certainly from another age, removed from my country’s culture. They generously put up with my questioning.

No one objects to my wearing a Boston Red Sox cap at the game at a time when the Yankees and Red Sox are in fierce competition for first place in the American League (East). I have never understood why I wear a Boston cap, since I am a New Yorker to the marrow. Probably just to be a contrarian in a city of Yankee lovers. (In Boston these things are taken far more seriously. At Fenway Park,where the Red Sox play, you wear a Yankee cap at your peril.)

I am enchanted by the view of the city skyline from my seat. By the setting sun, its light reflecting on the silver clad Freedom Tower in Lower Manhattan. By the changing cloud formations. A rainbow appears, produced by a distant storm. As darkness comes, the illumination of skyscrapers and East River bridges. A cooling breeze arrives to refresh us.

The games conclude. I bid my seating companions farewell and depart, retracing my steps: Ferry boat ride and then subway. I reach my apartment at 11 p.m. The conclusion of a seven hour adventure to another island within my city and another lifestyle.