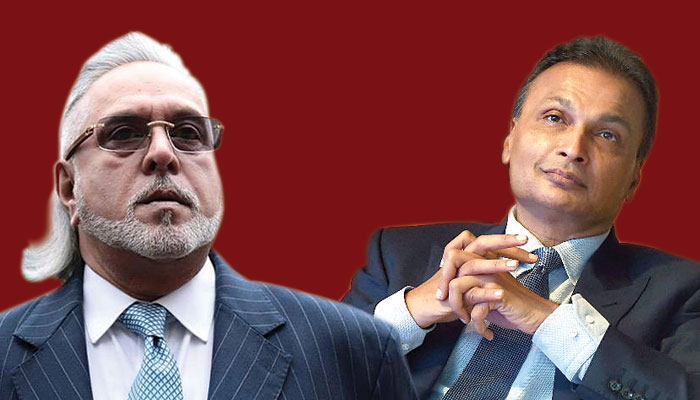 Let me make it clear at the very outset that I’ve never been introduced to Vijay Mallya and Anil Ambani, although I’ve attended several functions where either one or both were present. Even with chances of being maligned having a biased approach I’ll proceed to put my thoughts because the truth as they say must prevail.

Vijay Mallya has been unfairly treated by the agencies including CBI, ED and IT department because of politically motivated extraneous factors. Politicians across political lines refer his name in public statements to influence the electorate while the government is using it to set an example before other industrialists whose companies are facing financial stress. For a total loan of Rs 5,100 crore lent to Kingfisher Airlines, the ED has reportedly already seized the assets worth Rs 13,900 crore, highlighting the extent of unfair treatment meted out to him.

Media reports suggest Mallya has made every effort to settle with the Banks. He has made a one-time settlement offer amounting to Rs 4,400 crore to SBI which was rejected. Further, he made two settlement offers to the banks when proceedings were filed by them in the Supreme Court on March 29, 2016 and April 6, 2016 but both the offers were rejected by the banks. He along with UB Group had filed an application before the Karnataka High Court to sell assets worth about Rs139 billion and had requested court permission to allow the sell of the assets under judicial supervision and repay creditors. Mallya has been facing investigation for alleged siphoning and diversion of funds granted as loans to Kingfisher Airlines. The ED claims that in the guise of lease rental payments for aircraft and misrepresentation before banks for payments towards ground handling of airlines, loan money was used for his personal benefits.

To understand Mallya’s intention let’s read his very recent tweet: “For three decades running India’s largest alcoholic beverage group, we contributed thousands of crore to the State exchequers. Kingfisher Airlines also contributed handsomely to the States. Sad loss of the finest Airline but still I offer to pay Banks so no loss. Please take it. Politicians and the media are constantly talking loudly about my being a defaulter who has run away with PSU Bank money. All this is false. Why don’t I get fair treatment and the same loud noise about my comprehensive settlement offer before the Karnataka High Court? The most important point is public money and I am offering to pay 100 per cent back. I humbly request the banks and Government to take it.” What else the authorities need?

Earlier before he left India the tycoon wrote letters to both the Prime Minister and the Finance Minister on 15th April 2016 and when he didn’t get any reply later made those letters public. He had urged the PM to appoint an ombudsman or a committee to examine all the facts so that justice can prevail. In the letters, he said that “he has become the ‘Poster Boy’ of Bank default and a lightning rod of public anger.” Not to forget, Vijay Mallya was not only a businessman but an MP and the letter was written on his official letterhead. PMO should reply why no response was drafted as is the usual practice. With such intended lapses it is evident that the CBI and ED were determined to frame criminal charges against him. In my view ED virtually made itself a laughing stock when it declared Vijay Mallya a fugitive under the Fugitive Economic Offenders Act. A man who is a non-resident Indian with a permanent address in London and has substantial business overseas cannot flee the country. I feel it was just a normal course leaving no space to be claimed by ED as “under suspicious circumstances”. Opposition’s stupid claim too has no substance that before leaving he informed the Finance Minister.

Politicians and the media alike have accused him of having run away with Rs. 9,000 crore that was loaned to Kingfisher Airlines while some of the lending Banks have labelled him a wilful defaulter. Several times he had clarified, which is 100 percent true, that the huge loans he took from banks went into keeping Kingfisher Airlines afloat despite high jet fuel prices. For being unable to repay the loans, he blamed high crude oil prices (from $ 60 per barrel to $145 barrel), high rate of ad valoreum sales tax on ATF, and depreciation of Indian currency by 20 percent, steep increase in airport charges and also global financial markets crises. All these problems were very much prevalent.

Now about the process of lending – The PM in Lok Sabha has stated “Much before internet banking, the Congress Party invented phone banking and this caused the NPA mess. A phone call would get loans.” Very true. Surprisingly, no forensic audit was done by the consortium of banks despite being aware of the poor financial health of Mallya’s companies. How bankers granted loans on the basis of promises and imaginary claims? A businessman, to save his ship, will come out with many excuses and imaginary stories but it is the duty of the lender to check and take decision. Certainly, more than Mallya the culprit is the banker who signed the papers.

India is only going to lose declaring Mallya as a poster boy because the circumstances and proofs are screaming otherwise. It’s high time Finance Ministry must clear the mess and not let the investigating agencies take the lengthy course which will only end up creating more troubles for the credit space in the country.

Anil Ambani
Congress attacked Prime Minister Narendra Modi over farmers’ issue, saying he was making two Hindustans – one for Anil Ambani – who without doing anything, without making an airplane, will get the Rafale contract worth Rs. 30,000 crore. And “PM Modi says ‘Bharat Mata ki Jai’ before every speech, he should instead say ‘Anil Ambani ki jai’.” The Congress has been alleging that the Modi government is supporting Anil Ambani in the defence sector, saying that he was given business worth over Rs 30,000 crore as offsets contracts in the Rafale combat aircraft deal.

This is something really disgusting. Indian politicians have absolutely no regards for businessmen, who alone were instrumental in creating millions of jobs despite the utter nonsense practiced by the successive governments since 1947. They only use and abuse them. After independence, even the great Birla was not spared who single handedly funded freedom movement and supported Gandhi to live royally and experiment. Sarojini Naidu had narrated all this in better words and I’ll not repeat.

Now the fact is contrary to the Congress narrative, it has emerged that the defence ministry has taken serious action against the Reliance firm. “The bank guarantees of Reliance Naval have been encashed and action has been taken for not supplying five Offshore Patrol Vessels in time. There is no pressure from anywhere to not act against them,” Navy Chief said at the annual Navy Day press conference. The bank guarantees are submitted by vendors as a security with the government for fulfilling the contractual obligations and if they are not able to fulfill their promises, the government has the right to encash them as a punishment.

In a letter to Rahul Gandhi Anil Ambani reminded the legacy of his late father Dhirubhai Ambani, to justify his company’s credentials for being chosen as the Indian partner for a joint venture with Dassault and also the relations with Gandhi family. And he was right.

History pages reveal that in 1980 late Dhirubhai Ambani publically showed his political clout by co-hosting a party celebrating the return of Indira Gandhi after the short-lived Janata party government which was attended by her. And after two years when she came back to power her government repaid the dividends by raising customs duty on polyester chips, used by Orkay and levying “anti-dumping” duty on PFY. Again in 1986 when falling polyester yarn prices pulled Reliance share price down from Rs 388 to Rs 218 the Government’s wheels turned in its favour again. V.P. Singh was dropped as finance minister and Import duty on PTA was reduced, and polyester fibre was taken off OGL List. Later tax burden lightened thanks to helpful budget. And the list is really long.

Like his illustrious father Anil Ambani is also doing what he is supposed to do as an industrialist. Why name him? Just because he can’t give a fitting reply? When morality has no space in politics why should politicians expect it in business? Unfortunately we have to bear these stupidities. Even as the Rafale controversy continues to hit headlines, Yahoo’s Year in Review list names him among the top finance newsmakers of 2018. But is he really?