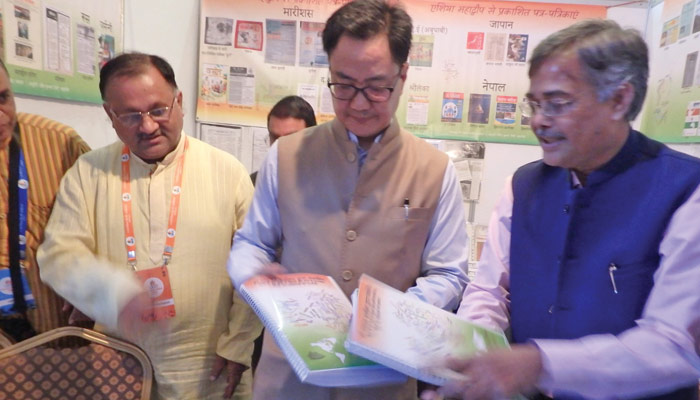 We hardly come across such people these days. That too, once they have achieved the usual goals in life, like a secure government job that also takes care after retirement with a handsome amount of pension. But Dr Jawahar Karnavat, who is a banker working for the Bank of Baroda is a different man altogether. I feel privileged to know him from a very close quarter having similar interest in literature.

Dr Jawahar Karnavat is a busy man these days being well above in the hierarchy of Bank’s management with lots of responsibility. Tremendous work load arising in the event of the merger of three banks (Dena Bank and Vijaya Bank merged with Bank of Baroda) would have left any other person weary, but meet Dr Karnavat and one can just gasp with his exuberance. Besides his usual official responsibility he still has the same passion to collect the rare Hindi magazines and newspapers published in any part of the earth. He will get to it by any means. That’s his passion since last two decades.

It was in fact an offshoot as he has been

exploring the history of Hindi Journalism outside India for the last 20 years. Very soon his magnum opus entitled Videsho Me Hindi Patrakarita giving a detailed account of Hindi journalism outside India will see the light of day. His zeal for research in this area has taken him to many countries of Asia, Africa, North America, Europe, and Australia continents. So far he has collected more than 93 Hindi journals of nearly 22 countries published in the last 115 years. He has several issues of those journals, probably not content just to find one copy to make his list longer. Rather he wants all available copies of that particular magazine. Thus he has stacked a large number of almost unheard and unseen magazines and newspapers (by even the research scholars) published in Hindi outside India.

But it was not an easy task. It has taken years of patience, travel, and not to forget investment of time, energy and money. All for his love towards literature – in fact his love towards Hindi and its evolution. I’m sure many of his colleagues must have called him a man of impetuous passion. But that’s a price one has to pay when one embarks on something one really wanted to achieve.

It was 2001, as he vividly remembers, when a rare copy of a magazine, well documented in the history of India’s freedom struggle came in his possession. An overjoyed Dr Karnavat fell in love head over heels with that and gradually his fascination towards Hindi language and literature pushed him to collect such magazines as many as he could lay his hands upon. His interest took him to various continents. Some by the virtue of his official engagements and many visits he funded from his own pocket.

He has visited some of the well-known national libraries, documentation centers, and various institutions around the world. In the short span of time he was able to contact several people across the continent who very enthusiastically came forward to help him. Such endeavors are rare.

I have leafed through some of his rare possession and it has always been an eye opener experience. He has in his collection Hindi newspapers and magazines published from Nepal, Japan, UAE, Sri Lanka, China, Singapore, Kuwait, Pakistan, Mauritius, South Africa, Great Britain, Norway, Holland, Hungary, Germany, Russia, USA, Canada, Trinidad, Tobago, Surinam, Fiji, New Zealand and Australia. All these were published between 1903 and 2018. In all there are 25 weekly, 3 fortnightly, 40 monthly, 18 quarterly and 7 half yearly magazines in his collection which are published in past 115 years. The maximum titles are from Mauritius, Fiji, USA and UK – 15, 10, 8, and 7 respectively. Then there are 6 magazines from Australia, 5 from New Zealand; 4 each from Japan and Nepal, 3 titles each from South Africa, Norway and Surinam; two titles each from Russia, Singapore, Canada, Trinidad; and one title each from Germany, Hungary, UAE, Kuwait, Sri Lanka, Holland and China. The list doesn’t end here as it doesn’t include various Special Issues published to commemorate some historical events.

His collection includes many rare newspapers and magazines of historical significance. The oldest one is the Indian Opinion, published in 1903 in South Africa in Gujarati, Tamil and English in addition to Hindi. Its role in world politics is well-known as it was published by Mahatma Gandhi. The Dipawali special issue of Shanti Doot published from Fiji contains as many as 120 pages. There are a few handwritten bulletins. “These single copy magazines were circulated by their editors. After reading one was passing to another person, ultimately the copy used to get back to the editor,” informs Dr Karnavat. Handwritten magazine Durga, released in 1935 in Mauritius is an example. Dina Patrika was also handwritten magazine brought out in Hungary. Shantidoot newspaper published in 1935 in Fiji and Jwalamukhi published in Japan are a few important names. Tasviri Akhbar published in 1913 in Britain carried only pictures with short captions.

As the word spread about Dr Karnavat’s rare achievement, he was called by many literary and social organizations and institutions to exhibit his collection, not only inside but also outside India. Now it has become a constant feature at Hindi Conferences around the world. The External Affairs Ministry of Government of India had specially invited him to exhibit on the occasion of the World Hindi Conference held at Mauritius from 18th to 20th August 2018. He was a part of the delegation of the Government of India and the event was attended by Kiren Rijiju, Union Minister of State for Home Affairs and Shri Keshari Nath Tripathi and Mrs Mridula Sinha, the Governors of West Bengal and Goa, respectively.
Now the constant applause and appreciation has become a part of Dr Karnavat’s life. A special program on his rare collection was produced and telecast by the Loksabha TV. Even Limca Book of World Records has shown interest to include this achievement. After all, this is a unique endeavor and perhaps no other individual in the world has done this at personal level.

Dr Saab (as he is fondly called by his friends; and he has unaccounted with a very wide network) has been getting offers from some of the well-known libraries and institutions wanting to give his collection a decent display for the benefit of generations to come. An institution from Bhopal is even coaxing him offering “Dr Jawahar Karnavat’s Corner” at its prestigious complex to display the collection. But his journey is still on.