No one leaves home unless home chases you 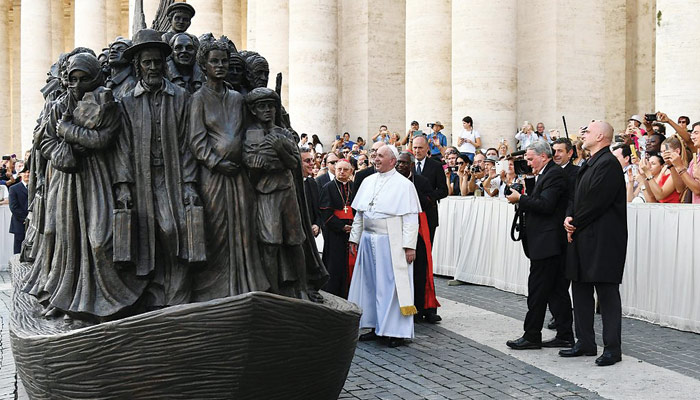 Migration has become a flash point around the world. According to the International Organization for Migration, this year so far there have been more than 2300 migrant fatalities worldwide. The situation has gone worse since the European migrant crisis started in 2015. The list is endless. The Greek government wants to start returning thousands of migrants to Turkey following a deadly fire that broke out at an overcrowded camp, in a bid to ease pressure on the overcrowded camps. The oppression of the Rohingyas in Myanmar is the new entrant in the list. No country is willing to accept people, who have been displaced by economic deprivation and wars, and, are seeking a better future elsewhere.

Earlier it was not like this. In the early forties, when Jews and artists and others had to leave Germany, France, Spain and Italy, they weren’t welcome in the United States, but Mexico welcomed over thirty thousand refugees. And when Americans had to leave the US because of the McCarthy horror trials, many moved to Mexico where they were welcomed. Now the same US under the Trump administration’s latest restrictive immigration policy effectively ends asylum relief for the refugees seeking it at the U.S.-Mexico border. This will, in all likelihood, end up in more death, kidnapping and torture of individuals.

Sadly, India, which boasts of a rich legacy of everything good, is not far behind US. Only the shape of the issue is little different. NRC (National Register of Citizens) is the point of discussion here. In Assam nearly 19.6 lakh people are out of the NRC. Out of that around 12 lakh are Hindus and Bengali Hindus. This has not only changed the political narrative in the state but also made this vast number of people uncertain about their future. The register has made people refugees in their own country.

This has sent shockwaves in the minds of people in West Bengal. The reason is the border state had attracted many families from East Pakistan and Bangladesh first during Partition in 1947 and again after the 1971 war. There are second generation men and women born in those families, who should be considered naturalized citizen of India. But that’s not so.
The panic was sparked off by the politicians belonging to BJP. The party functionaries are repeatedly saying that if the party comes to power, it will implement NRC in Bengal. Even Union Home Minister Amit Shah has announced that “we are here to bring the NRC, and those who are excluded will be sent out of the country after due legal process.” However, NRC has never been a project of the BJP. Assam NRC is based on the 1985 Assam Accord, which at its core sought to protect Assamese identity. On May 5, 2005, a tripartite meeting among the Centre, Assam government and All Assam Students’ Union was held, chaired by then Prime Minister Manmohan Singh, when it was decided to update the NRC. The Supreme Court got involved in 2009 after, Assam Public Works, an NGO, filed a writ petition for the deletion of illegal migrants’ names from voter lists in Assam.

Now the BJP has introduced a communal angle in the debate by insisting that Hindus excluded from the NRC would be protected. BJP general secretary KailashVijayvargiya has announced that not a single Hindu will have to leave the country. Each and every Hindu will be given citizenship. RSS supremo Mohan Bhagwat endorsed his views. He said that the RSS will stand by Hindus not listed in the final NRC in Assam and that Hindus anywhere in India need not worry. The question is – why only Hindus? Clearly, BJP feels, it will help the party to win the West Bengal election in 2021. To enable this, the government wants to implement the Citizenship (Amendment) Bill which would provide Hindu refugees Indian nationality. But again, why only Hindu refugees? Why not all? Trouble, misery and war never segregate people. Then, why this discrimination?

Although, at present there is no NRC activity is going on in West Bengal but across the state, queues are lengthening outside government offices with people seeking the documents necessary for inclusion in the NRC. Four people had died after falling ill while standing in queues with thousands of villagers.

The panic has reached to such a height that the West Bengal police have confirmed that two persons, one 25-year-old man and another 50 years old, allegedly committed suicide due to depression for failing to procure the requisite certificates to prove their citizenship. With this, the number of those dead over NRC rose to 11 in the state.

Politicians around the world have been now brainwashing their people into believing that migrants are stealing their jobs and livelihood. Historically it is incorrect. Migrants had been only adding value to the adopted country more than being a burden. NRC has become a political ball to play around. Never to miss a chance, Chief Minister Arvind Kejriwal said if the NRC is implemented, the Delhi BJP chief Manoj Tiwari will be the first one who will have to leave the city. Kejriwal forgot NRC identifies an illegal immigrant that is people who are from outside India and not from other parts of India. Harayana CM Manohar Lal Khattar, Congress leader Bhoopinder Singh Hooda and UP CM have also spoken about having NRC exercise in their own states. Recently a letter from the UP DGP to all district police chiefs on identification and verification of illegal Bangladeshi migrants and other foreigners has led to speculation of the NRC exercise being replicated in UP.

Migrants in India are basically from Bangladesh. What was Bangladesh or East Pakistan? Who are these people? These people have not come from another planet. East Pakistan was a part of India not a hundred years back. These refugees are the creation of historical blunders, government policies, and poverty. Vasudhav Kutumbkam is India’s traditional mantra. If BJP and RSS have committed to stand by Hindus not listed in the NRC with a message that Hindus anywhere in India need not worry then why not Muslims too. After all, their forefathers too belonged to this nation once. Indian government has a duty to protect them before it thinks of assimilation of Pak Occupied Kashmir. Political commentary will never stop as the leaders will keep bringing arguments to support their filthy demands. But let us understand who becomes a migrant. Sometime back I read a beautiful poem “Home” by Warsan Shire, a British woman of Somali origin, and I quote:

you only run for the border
when you see the whole city running as well
your neighbors running faster than you
breath bloody in their throats
the boy you went to school with
who kissed you dizzy behind the old tin factory
is holding a gun bigger than his body
you only leave home when home won’t let you stay.

no one leaves home unless home chases you
you have to understand,
that no one puts their children in a boat
unless the water is safer than the land

No one leaves home until home is a sweaty voice
in your ear saying-
leave, run away from me now
I don’t know what I’ve become
but I know that anywhere is safer than here.

Sunday, the September 30, 2019, was 105th World Day of Migrants and Refugees. A statue inspired by a passage in “Letter to the Hebrews,” from the New Testament was unveiled in St. Peter’s Square as homage to the displaced by Pope Francis. The statue “Angels Unaware,” by the Canadian artist Timothy P. Schmalz, depicts 140 migrants and refugees from various historical periods traveling on a boat. Francis said that world must follow the policy of ‘Welcome, protect, promote and integrate.’
Forget the world, but let India listen to it.