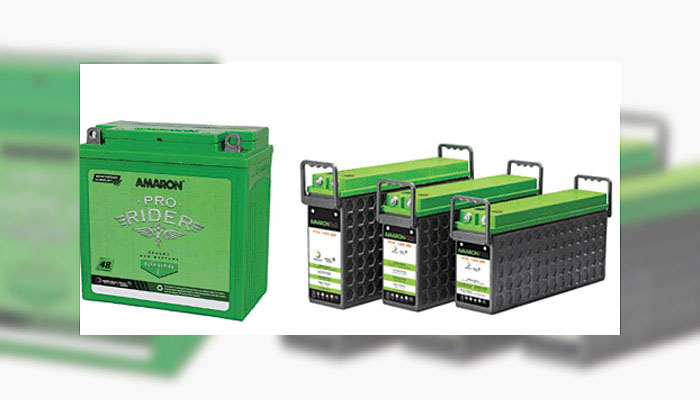 By Pratit Nayan Patel
Incorporated in 1985, Hyderabad based Amara Raja Batteries Limited is the technology leader and one of the largest manufacturers of lead-acid batteries for both industrial and automotive applications in the Indian storage battery industry. In India, Amara Raja is the preferred supplier to major telecom service providers, Telecom equipment manufacturers, the UPS sector (OEM & Replacement), Indian Railways and to the Power, Oil & Gas, among other industry segments. Amara Raja’s industrial battery brands comprise PowerStack, AmaronVoltTM and Quanta. The Company is a leading manufacturer of automotive batteries under the brands Amaron and PowerzoneTM, which are distributed through a large pan-India sales & service retail network. The Company supplies automotive batteries under OE relationships to Ashok Leyland, Ford India, Honda, Hyundai, Mahindra & Mahindra, Maruti Suzuki, and Tata Motors.

The Company’s Industrial and Automotive Batteries are exported to countries in the Indian Ocean Rim. Company’s plants are located in Tirupati and Chittoor, Andhra Pradesh. In December 2017, Company has commissioned its two-wheeler battery plant at the Amara Raja Growth Corridor in Chittoor, Andhra Pradesh. The first phase of the plant, which has been commissioned, will have a capacity of 5 million units. The plant will have an ultimate capacity of 17 million units with an estimated investment of Rs 700 crore, taking the total capacity for two-wheeler batteries to 29 million units.

Industry Overview
The Indian battery space has been flooded by a wide range of batteries depending upon their application. But, Lead-acid batteries are the most widely used battery in the market, including valve-regulated lead-acid (VRLA), absorbed glass material (AGM), and gel batteries, backed up by efficient recycling process. The lead acid battery market can be divided into two broad spectrums – automotive and industrial batteries– and finds wide application in transportation, communications, power, defence, motive, solar and railway industries. The automotive and communications sector accounts for majority of the total lead-acid battery consumption. The automotive segment contributes in excess of 60% of the total turnover of the Indian lead acid battery market.

Automotive batteries are start, light, and ignition (SLI) batteries, though they are expected to fuel a greater number of functions including in-vehicle entertainment systems, power steering, power locking, power window systems, etc. Demand for auto batteries can be divided into the OE (original equipment) market and the aftermarket segments. In the industrial segment, batteries are used as a standby source of power for various applications like Telecom, Railways, Utilities, UPS, Solar, Motive Power and Defence among others. Automotive sector, smart cities, digital India program, shift towards data driven telecom services, solar power projects etc will lead to surge in demand for lead acid batteries in India. As of 2016, the market size of India lead acid battery was pegged at US$4.47 billion and is expected to grow at a CAGR of 8.36%, in value terms, during 2017-2022.

Our Take
It is one of the largest battery manufacturers in country. Every minute, there are five Amaron batteries being fitted in vehicles in India (excluding two-wheelers). E-mobility is interesting opportunity that can completely alter the dynamics of the storage battery space for the sheer size of the opportunity, for India plans to leapfrog the conventional mobility model to the green mobility model. The government wants to see 6 million electric and hybrid vehicles (22,000 electric vehicles sold in 2016; of which only 2000 were cars and other four-wheelers) on the roads by 2020 under the National Electric Mobility Mission Plan 2020. This is biggest opportunity for battery manufacturer. Company is exploring and evaluating possibilities of making a foray in other technologies even as we work on strengthening their dominance in the lead-acid space. Moreover, Company is looking beyond India to those nations who today are where India was a decade or two ago (from a development perspective) and who are likely to follow a similar growth story over the coming years. Last year in the four-wheeler battery space, the Company added a new account and emerged as the exclusive battery supplier to the Renault Kwid. In the two-wheeler battery space, the Company commenced supplies to Bajaj and Hero. In the Commercial Vehicle space, the Company enlisted Volvo as its customer, supplying batteries for its earth-moving vehicles. At current market price ABL trades at PE ratio of 30.5x earnings. Based on above financial and performance parameters, the ABL share looks quite attractive at the current level for next 18 to 21 months to get a handsome return.