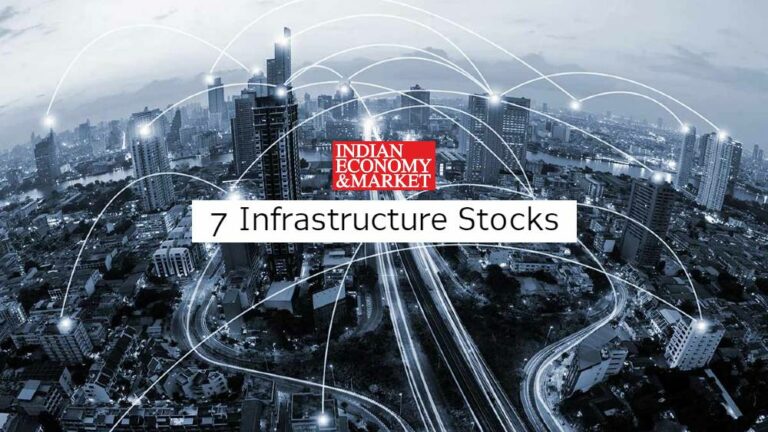 Infrastructure sector is a key driver for any economy. The sector is highly responsible for propelling India’s overall development and enjoys intense focus from Government for initiating policies that would ensure time-bound creation of world class infrastructure in the country. It will certainly act as a catalyst for India’s economic growth as it drives the growth of the allied sectors like townships, housing, built-up infrastructure and construction development projects. The government has launched the National Infrastructure Pipeline (NIP) combined with other initiatives such as ‘Make in India’ and the production-linked incentives (PLI) scheme to augment the growth of infrastructure sector.

This clearly reflected in the April-November FY23 fiscal deficit numbers that expanded to 59% of budget estimate vs. 46%, both in the previous month and previous year. Capital expenditure remained strong at 60% of budget estimate. Chemicals, railways, roads, rural development and PDS has seen a strong spending by government. This shows the government has frontloaded the capex plan.

The forecast for India’s infrastructure during the following ten years is promising. It is filled with attractive government initiatives and a backlog of large projects that are backed by a sizable amount of capital and financing. Government of India launched Gati Shakti-National Master Plan, which will help lead a holistic and integrated development of infrastructure, generating numerous employment opportunities in the country.

Several other schemes have been announced to drive the sector’s growth. These include the National Infrastructure Pipeline (NIP), the National Monetisation Plan (NMP), and the National Single Window System (NSWS). In line with Gati Shakti initiative the NHAI has undertaken the development of digital infrastructure with laying optical fiber cables across the country starting with Delhi to Mumbai expressway and Hyderabad – Bangaluru corridor. This initiative will empower the government to provide internet connectivity and boost 5G roll-out across the nation.

The government’s ambitious plans under the Bharatmala program entail construction of 22 Greenfield expressways, including the Delhi-Mumbai Expressway, 23 tunnels and bridges, and 35 multi-modal logistics parks.

Such schemes are helping infrastructure companies to gain robust order inflows. For instance, the Mumbai-based Larsen & Toubro company registered its highest-ever order book value of Rs 3,72,000 crore during H1FY23. The company through its investor presentation informed that the order prospects for 2HFY23 were at Rs. 6,30,000 crore as of September, with infrastructure accounting for a significant share of roughly 72%.

Similarly, Ahluwalia Contracts, a major integrated construction company with headquarters in Delhi, had, at the start of the year, provided guidance for order wins in the range of Rs 2500–3000 crore for FY23. But now, almost nine months later, the company asserts that it has already earned Rs 3770 crore. Without taking execution during Q3FY23 into account, the development has increased its book-to-bill to 3.2x. The company management now expect its guidance to reach over Rs 4000 crore threshold.

All this is clearly getting reflected in the performance of the stocks of infrastructure companies. Nifty Infrastructure Index, which includes 30 companies from different segment of Infrastructure providing companies such as Larsen & Toubro Ltd., Siemens Ltd., and UltraTech Cement Ltd among others is up by 4.8 % in last one year compared to 2.7 per cent generated by Nifty 50 in the same period. 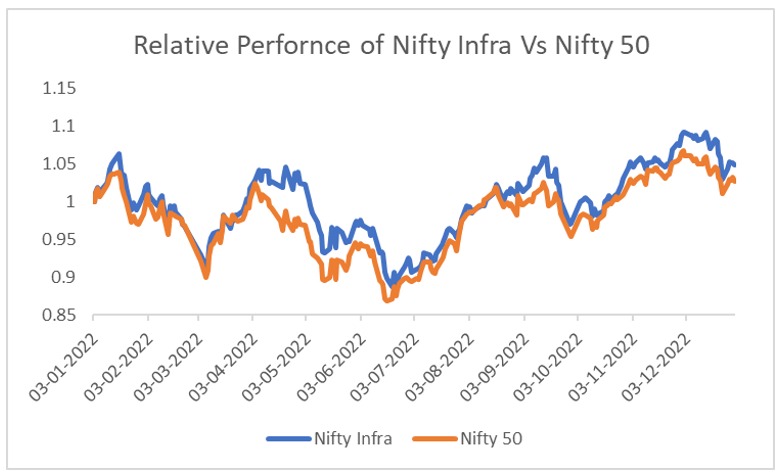 The NHAI has set a target of awarding 6,500 km in FY23 and along with tightening of bidding norms,

organized players are expected to witness better order inflows in H2FY23. During the last fiscal, the NHAI awarded over 6,300km of road projects. Moreover, the National Infrastructure Pipeline, which aims to develop overall infrastructure, would support road construction moving forward. The National Infrastructure Pipeline has a coverage of 9,335 projects (vs. 6,835 projects earlier) with total envisaged cost of Rs 108 lakh crore from FY20-FY25.

The center has budgeted its capital spending at a record high of Rs 7.5 lakh crore (+30% FY22RE), focusing on infrastructure. Since the majority of these projects would be awarded under EPC and HAM (Hybrid Annuity Model) models; infrastructure building companies will be major beneficiaries of the government’s infra spending.

Looking at the huge opportunities available in infra sector and underperformance of these companies in last few years, we have picked SEVEN COMPANIES from this sector that can reap benefit out of such spending.